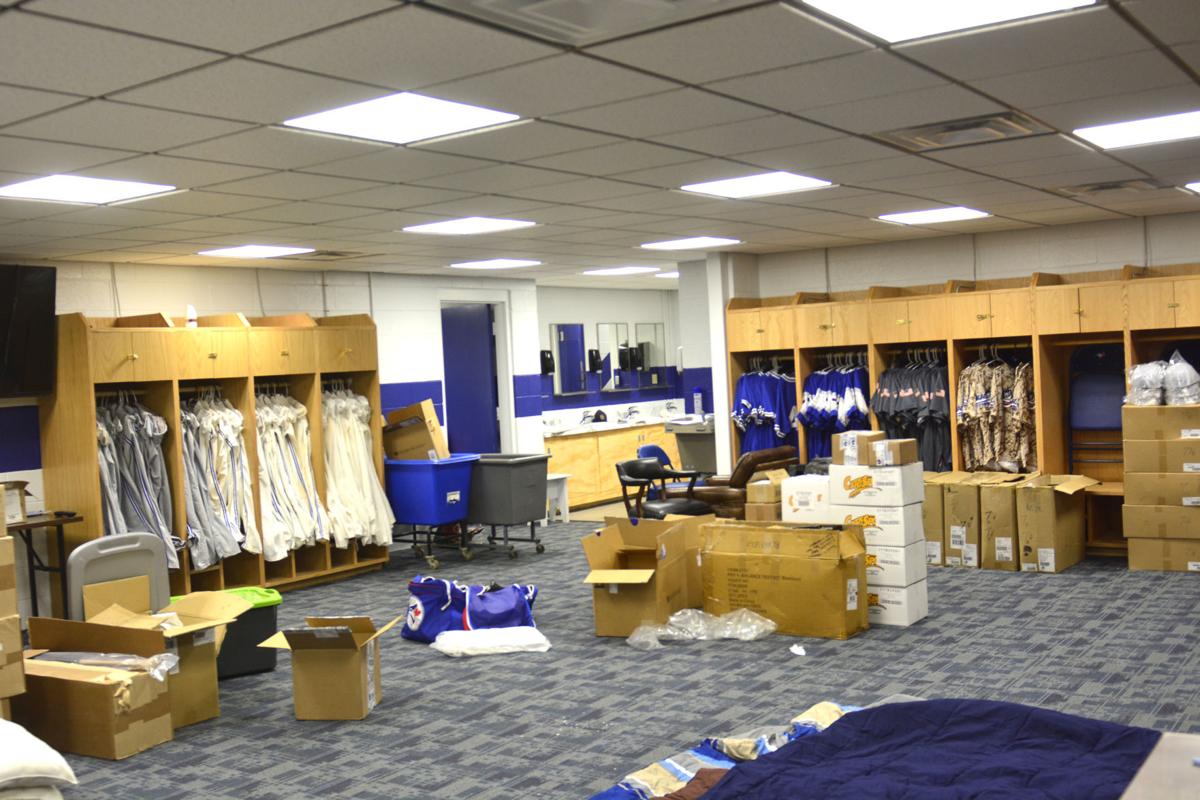 Renovating the clubhouse, shown in the process of an overhaul, won't necessarily add to the fans' enjoyment of games at Bowen Field at Peters Park, but the Blue Jays players should certainly like it better. 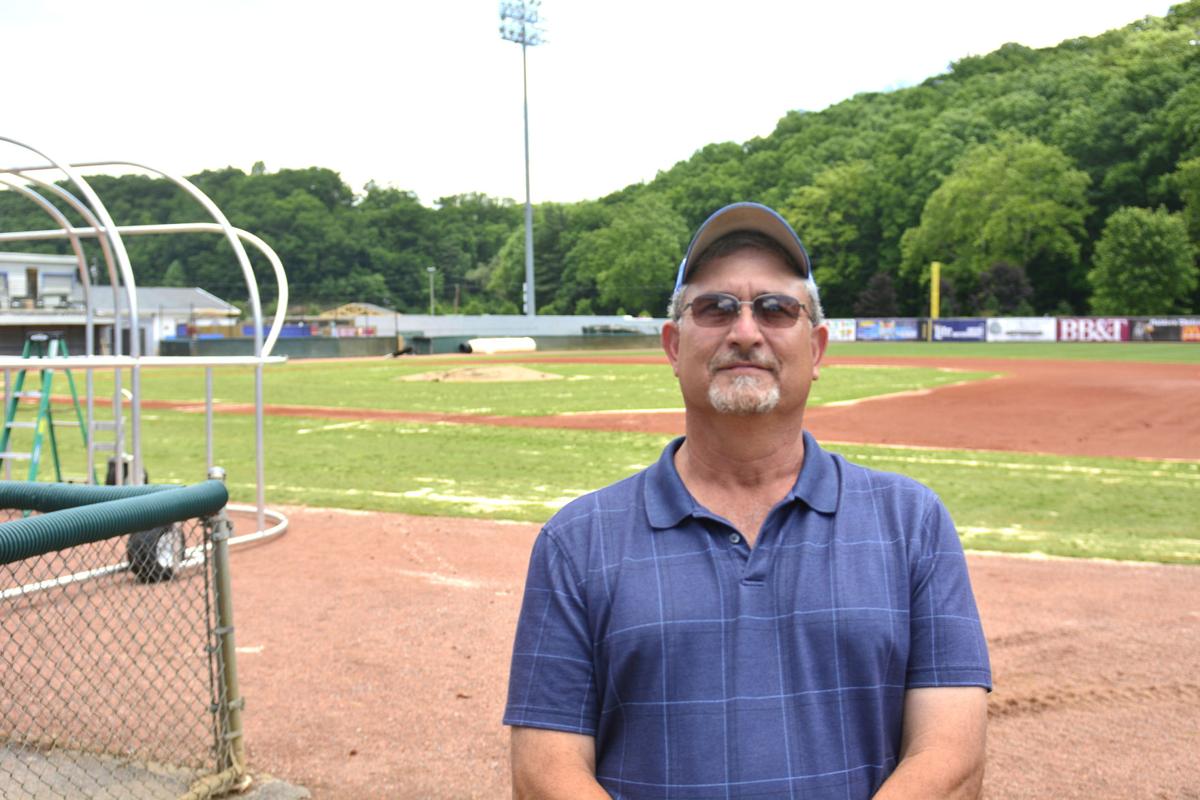 Bluefield Blue Jays General Manager Rocky Malimasura is a Bluefield native who literally grew up across the street from the historic ballpark he now manages.

Renovating the clubhouse, shown in the process of an overhaul, won't necessarily add to the fans' enjoyment of games at Bowen Field at Peters Park, but the Blue Jays players should certainly like it better.

Bluefield Blue Jays General Manager Rocky Malimasura is a Bluefield native who literally grew up across the street from the historic ballpark he now manages.

That is what fans of the Bluefield Blue Jays should expect while attending baseball games this summer at Bowen Field.

“My goal this year is to increase the family fan experience. I want this ball park fun and enjoyable,” said Rocky Malimasura, in his first season as general manager of the Bluefield Blue Jays. “I want people to know when they come they are going to have a good time and they are going to get a good, consistent product that is worth the value of the dollar.”

Bluefield will host 34 regular season games starting on Sunday, June 25 against the Burlington Royals and ending on Aug. 28 with the Danville Braves. Perhaps a few home playoff games will follow.

“When people get out of their cars I want them to feel welcome,” he said. “I want to them to feel the atmosphere, that it is going to be fun, ‘We are going to have a good time when we come in.’”

Expect plenty of ‘new’ at what is now known as Bowen Field at Peters Park this season, beginning with the entrance, which is undergoing a major facelift, with a new ticket booth and stone facade and a larger concourse for fans. That work, and much more, is currently in progress, which is why Malimasura isn’t complaining about the Blue Jays opening their season next Thursday on the road at Greeneville.

“This year has kind of been a blessing with everything that we have got going on. There has been an immense amount of work,” said Malimasura, of Bowen Field, which has underwent significant renovations since May 1 thanks to a generous monetary donation by Bluefield residents Charles and Dafney Peters. “There is a lot of things that have been done that the normal fan will never see, but the things that we are doing out front with the new entrance and ticket booth and opening the courtyard up, the renovations in the public restrooms, those are things that the fans are going to see.”

The Blue Jays, who will be managed for a seventh straight season by Dennis Holmberg, will arrive in Bluefield on Sunday evening, with practices slated for Monday through Wednesday. There will be a “Meet the Jays” function with season ticket holders and sponsors on Monday at 6 p.m., and a “Bowling with the Jays” for area kids on Tuesday from noon to 2 p.m. at Mountaineer Lanes. All area little league kids are urged to attend and are welcome to wear their uniforms to the event.

Now to get those kids, and their families, out to the park, which will be a focus of Malimasura after a steady decline in attendance in recent years.

“We averaged right at 800 people last year according to the league stats per game,” he said. “You have your big nights, the fireworks nights, but I want to build that base. I want the children back, I want those little league teams back in here. I want folks to know Bluefield as the place to be.”

Malimasura has felt that way for most of his life, having been practically raised at Bowen Field by his father, Patsy, who was a staple at the facility for decades.

“I grew up in the ball park. I guess the first time I was ever in the ball park I was probably 3 or 4 years old. I grew up literally across the street,” said Malimasura, who replaced Jeff Gray in his current position. “My dad was here until the day he died. It has been somewhat of a natural transition. It has been a lot of fun trying to get to this point.”

Bowen Field has been a blur of activity since May 1 when the process began to install a new Bermuda grass infield. In addition to the new entrance and office to provide additional storage space, the bathrooms and clubhouses have been updated, including new lockers with USB ports and outlets for player’s media devices, along with improvements to the facility that houses the indoor batting cages and LED lighting has been installed throughout the park.

“We are to the point we are trying to put the finishing touches on everything right now,” Malimasura said. “There are going to be some things we don’t get done by opening day and I hope the public understands with the volume of work we have had going on there are certain things that are going to take a few extra days to get done.”

Expect ticket prices to remain affordable, including $6 for general admission, while season tickets cost $75 for 34 games, which Malimasura thinks is too good of a deal to pass up.

“For entertainment value it is going to be hard pressed for anyone to beat the pricing we have here,” he said. “I want folks that when they think about Bluefield and they get out of their car they are going to have fun and they are going to get that value for their dollar.”

There will also be new concession offerings, including brats with peppers and onions, Philly cheese steaks and improved chili and barbecue recipes. Mixed that together with a fan friendly and affordable environment and Malimasura expects fans to enjoy a positive game experience.

“One of the staples of minor league baseball right now is pushing to bring families in. We are going to be running some specials to bring these folks into the ball park, family deals,” said Malimasura, who added that all games will be live-streamed via the Blue Jays’ website and will be broadcast by Matt Popelka. “I have instructed all of my staff that we are going to keep the ball park clean, we are going to be friendly, we are going to be identifiable, we are going to be helpful. That is part of bringing those folks in. If they feel that they can walk through that gate and have their concerns addressed if they have concerns or questions, that helps everyone...I have got a team this year dedicated to fan experience, on-field games, the giveaways, those type things”.

As for trying to induce those area fans who might be neglecting baseball while thinking ahead to football season, Malimasura continues to focus on that three-letter word.

“I think you have to offer a unique experience. It just needs to fun,” he said. “That is what I am telling all of my staff this year. We want it to be fun.”

11 a.m., at Fredeking Funeral Service in Princeton. Burial will follow at Oakvale Cemetery.

Nelda Gay Weiss, 83, of Mason, West Virginia passed away on November 24, 2020. She was born on August 18, 1937 in Lamar, West Virginia daughter of the late Irvin and Delia O'Dell. She was a member of the Graham United Methodist Church. Mrs. Weiss is survived by her son and daughter-in-law, B…

CAMP CREEK -- Connie M. Brown, 70, went to be with her Heavenly Father on Saturday, November 21, 2020. Connie was born Feb. 28, 1950, in Princeton, WV to Norma Lee (Kessinger) McGinnis and William Henry McGinnis. Connie was of the Methodist faith, belonging to the church where She found God …

11 a.m., at the First Christian Church in Princeton. Burial will follow at Roselawn Memorial Gardens, Princeton.