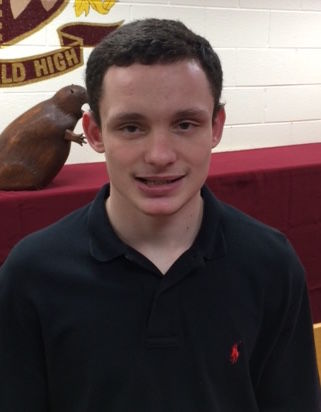 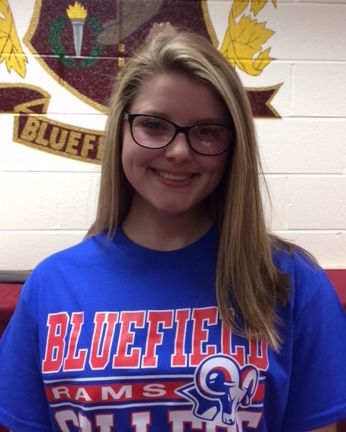 BLUEFIELD — Deiyantei Powell-Woods, Mason Walker and Chandler Cooper weren’t the only Beavers to sign up for future college athletic playing careers on Wednesday. Nor were the the only ‘football’ players.

Beavers did not transfer to Bluefield High School until just this fall. The humor of his new school’s mascot also being his surname was not lost on him.

“I moved here last semester from Charlotte, North Carolina,” said Beavers, who has been a club and school wrestler for eight years.

“It was a lot smaller here. But it was a better atmosphere for me, I think.”

He wrestles in the 126-pound weight class for the Beavers.  He played some soccer for the Bluefield boys soccer team, basically for conditioning purposes, he said.  He wants to major in kinesiology.

Beavers is the son of Joe Beavers and Beth Ann Beavers.

“I’m 24-8 so far this year. We have regionals this coming weekend, Friday and Saturday. I want to wrestle in college and hopefully would like to go even further. We’ll see how it goes.”

Beavers thinks he can wrestle in the 125 to 133 pound range at the college level.

Bluefield’s other college-bound football player from Wednesday is actually a ‘futbol’ player. It’s Miller’s only sport, which she plays during spring travel team season as well as West Virginia’s fall varsity interscholastic season.

“Actually I am a little surprised, but I’m super-excited,” said Miller, who is the daughter of Stephen and Bobbi Miller.

Miller already had her heart set on attending Bluefield College, where she plans to look into pursuing a criminal justice major.   She took the initiative to contact the soccer program and got the assessment process started.

“The only school I wanted to play at was Bluefield College. So one of my main priorities was to get in touch and practice with them and see how they were,” said Miller, who grew up in the East River Soccer system, where she’d been working on her game since the sixth grade.

“I worked hard just to get here and I’ve very excited to start this journey,” said Miller, who was a defender for the Lady Beavers during her senior season.

“I’m going to have to work twice as hard to be where I want to be. I’ve played a little bit everywhere on the field. But wherever coach puts me I’m fine,” she said.

Miller was one of the returning seniors who had added responsibility laid on her shoulders when low turnout raised the prospect that Bluefield might not have a girls soccer team this past fall.  She stuck to her guns and helped encourage a batch of rough recruits that gave the Lady Beavers enough players to get through the season.

“It was a little difficult at first. We started the season out with seven players and eventually got up to 15. We practiced as hard as we could. We were a very young team, but at the end it was amazing how much we’d grown,” Miller said.

She spent her senior season preoccupied with the development of her younger teammates. This fall, she’ll be focused more on developing her own game.