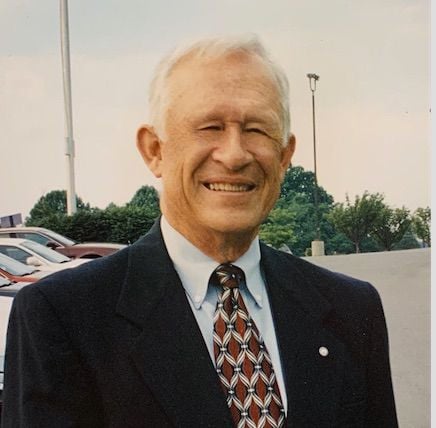 Cole worked for IBM and lived in New York until 1965 when his father passed away unexpectedly. Taking a one year “leave of absence” from IBM, he returned to Bluefield and took over the operation of his father’s International Harvester dealership, Cole Motor Company. In 1975 he formed Truck City Parts and in 1982 purchased Evans Chevrolet which then became Cole Chevrolet Cadillac.

News of his passing quickly spread Monday across the city that Cole served and loved.

"The Board of Directors of the City of Bluefield, along with City Manager Dane Rideout, were deeply saddened to learn of the passing of Paul Cole," Mayor Ron Martin said Monday. "Mr. Cole’s impact on the City of Bluefield cannot be overstated. He was the longest serving mayor in Bluefield’s history, having served from 1981-1993, and again from 2000-2001. We extend our condolences to Mr. Cole’s family, especially his children, Bill, Charlie, and Tom."

”Bluefield State College lost a true friend with the passing of Mr. W. Paul Cole, Jr.,” Bluefield State College President Robin Capehart added Monday. “His commitment to the area very positively impacted the city of Bluefield, BSC, and the region. His life served as a living example for doing things the way they should be done, and his legacy is evident in the lives of his sons —Bill, Charlie, and Tom — as expressed in their leadership and support for the community, the state, and beyond. In 2010, the BSC School of Business was named in honor of Mr. Cole, a fitting tribute to his life of service and excellence. Many years earlier, he served as Mayor of Bluefield, W.Va., and traveled with the BSC delegation to Taiwan, where he participated in establishing a partnership between Bluefield State and three institutions of higher education in the People’s Republic of China.”

“The City of Bluefield and the region has lost an amazing man,” — Garry D. Moore, a member of the BSC board and former mayor of Bluefield.

Capehart said the college will pray for and remember the Cole family during their time of loss.

“The City of Bluefield and the region has lost an amazing man,” Garry D. Moore, a member of the BSC board and former mayor of Bluefield, said. “Paul Cole led by example — an example that touched the lives of those who had the privilege of knowing him. As a businessman, he led from the front, directing several companies that provided employment and a brighter future for his employees and customers. As a civic leader and Rotarian, he was mayor of Bluefield and led the city during a critical time in its history. As a humanitarian, he generously supported his church and numerous charitable causes. In the early 1990s, Paul played an instrumental role in strengthening Bluefield State College’s educational partnerships with international colleges and universities. The W. Paul Cole, Jr. School of Business proudly bears his name. His principles for successful relationships in business and in life resonate through the education Bluefield State College’s students receive.”

"The Chamber of Commerce of the Two Virginias joins the Cole Family in mourning the loss of one of our distinguished members," Jeff Disibbio, president and CEO of the Chamber of Commerce of the Two Virginia's, added. "Paul Cole was a long time member of and advocate for the Chamber of Commerce, including his service as President of the Board. During his membership, Mr. Cole displayed exceptional dedication to the chamber and his community and was ultimately awarded the Robert F. Hamilton award in 2002. This award was given to those that exemplified superior community service as an individual or business. The community will mourn the loss of Mr. Cole and his contributions, both personally and professionally."

“Let us remember him and the greatness he did for a wonderful community that has thrived in Southern West Virginia for a long, long time,” Justice said. “Help us all remember him.”

Funeral arrangements are being handled by Mercer Funeral Home of Bluefield.

Amid COVID-19 concerns, an outdoor graveside service will be held at 11 a.m. on Thursday, July 2nd at Roselawn Cemetery with his grandsons serving as pallbearers. A funeral procession will organize at Mercer Funeral Home and leave at 10:40 a.m.