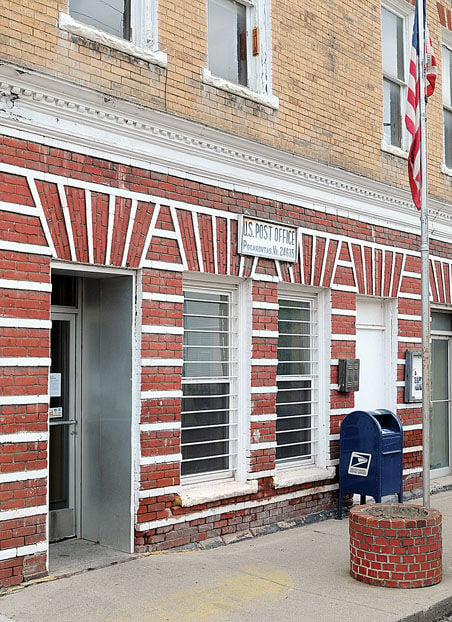 According to Jerry Gravely, vice mayor of Pocahontas, the Pocahontas Post Office will close Monday. The postmaster received an e-mail from the USPS announcing ‘emergency suspension of services.’ 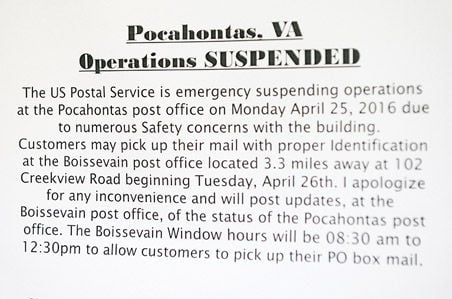 This note hangs on the door at the Pocahontas Post office.

According to Jerry Gravely, vice mayor of Pocahontas, the Pocahontas Post Office will close Monday. The postmaster received an e-mail from the USPS announcing ‘emergency suspension of services.’

This note hangs on the door at the Pocahontas Post office.

POCAHONTAS, Va. — The Pocahontas Post Office will close its doors on Monday, and it is up in the air as to when, or if, it will reopen at its current location.

Jerry Gravely, vice mayor of Pocahontas, said the post office was notified Wednesday of the closure, effective at the close of business April 25.

“They did an inspection (of the building) in March and found several things that were wrong and gave us 30 days to fix it,” he said.

Gravely said he does not know why the date was moved up, but the postmaster received an e-mail from the USPS announcing the “emergency suspension of services.”

The problems with the building, which the town owns and is more than 100 years old, include asbestos in the floors and poor air quality, he said, two major issues that cannot be adequately addressed in 30 days.

The sidewalk in front of the post office is not ADA (Americans with Disabilities Act) compliant and needs to be replaced as well, he added.

Gravely said the plan is for those who get their mail at the Pocahontas Post Office  to go to the Boissevain Post Office.

A meeting on the issue has been set for Monday at 5:30 p.m. at the Pocahontas Exhibition Mine Education Center, he said, and he urges everyone affected by the closure to attend.

“It (the closure) is temporary, but there will be a process and it will not be an overnight fix,” he said. “Right now, we don’t know how long it will take us to get the post office back open again.”

Neither the town nor the post office had been made aware of the problems before, he said, so this has not been an ongoing issue.

“Somebody (from USPS) came in February without notification and just looked around,” he said. “But they did announce the March inspection.”

Gravely said another option is to find another building.

“We don’t have a whole lot of money coming into the town,” he said. “It’s not only going to be hard on residents but hard on the town to come up with funding to do the necessary repairs, or get another building and move the post office. I don’t think it’s fair for the postal service not to give us a chance to come up with a plan to either move or address the issues.”

Since the post office leases the building from the town, it could impact the town’s revenue. He would not say how much money the postal service pays for the lease, but  did say the five-year lease was recently renewed.

Gravely said he has contacted Sen. Tim Kaine and Rep Morgan Griffith asking for help to get an extension to either fix the problems or at least come up with a feasible plan.

Griffith was traveling but his press secretary, Andrea Pivarunas, said his office was made aware of the situation late Wednesday afternoon.

“We are very concerned,” she said. “We are looking into this and I certainly hope this can be remedied for the people of Pocahontas.”

Gravely has also contacted Tazewell County officials about the problem and he said they are willing to help the town come up with a remedy for the situation.

But Tazewell County Board of Supervisors member Charlie Stacy (Eastern District) said that, at this point, it is a Town of Pocahontas issue.

“We have to evaluate what our obligations are to run the county and you have to impose a tax base that is sufficient to do that,” he said. “They need to look at that first, to see if they have established a tax base to provide the town with services. If they don’t have the ability to do that, I think there is a bigger problem that needs to be evaluated.”