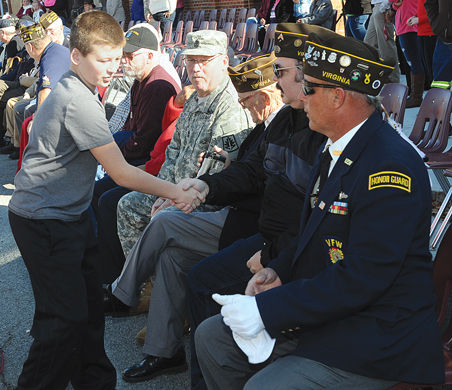 Cory Thornsberry, of Abingdon, Va., thanks Veterans for their service to our country 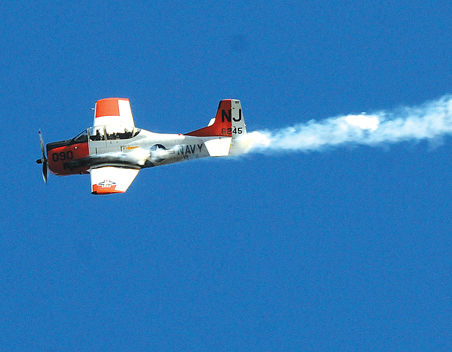 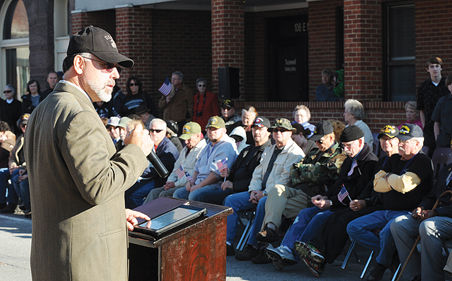 Cory Thornsberry, of Abingdon, Va., thanks Veterans for their service to our country

The T-28’s engine roared as it flew over the hundreds of people who had gathered for the event. Bowers took his first pass from east to west toward the peak of Paint Lick Mountain, flying at 250 miles-per-hour, according to Jerry McReynolds who invited Bowers, who is based at the WarBird Museum in Richmond, Va., to participate in the parade. Bowers’ cue to roll was the Tazewell High School Green T’s completion of the National Anthem.

Bowers made a “tear drop circle,” according to McReynolds, and made another pass through town. Only this time, the pilot streamed smoke from the T-28 as soon as he reached West Main Street near the fire department, and continued smoking until he passed the Tazewell Library and soared skyward again. He made one more high pass over town, and dipped his wings to the north and south, waving to the applause of the appreciative crowd.

“That’s something that you’ve probably never seen in Tazewell before,” Flora Sinkford said. Sinkford and McReynolds are members of the Veterans Day Parade committee.

The event was all about honoring veterans. The drill team from the Appalachian Detention Center in Honaker, Va., performed an exceptional close-order drill routine in front of the reviewing stand that was filled with veterans. At the conclusion of their drill, before they marched on, they performed an eyes-left and shouted: “Thank you veterans,” in unison. The crowd erupted in applause to show their appreciation.

“This is our first time of cooking for the veterans,” Dorothy White of Southern Graces Catering based in Tazewell said as she and several others prepared a dinner of turkey, dressing, potatoes, gravy, green beans rolls and all the trimmings to serve the veterans. The post parade dinner was in the recreation hall of the First United Methodist Church on Main Street.

“We feel very honored to be able to cook for these veterans,” White said. “We think that they haven’t been honored in the past in the way they should be honored. This is really an honor.”

The parade route stretched nearly a mile — perhaps even more — from the entrance to the high school, all the way to the Tazewell County Courthouse. Several veterans rode on motorized units, but many more walked the entire parade route. When they saw veterans standing in the audience, most marchers walked over to them, shook their hands and thanked them for their service.

Carl Burnette of Bluefield, Va., pulled one tour of duty in Vietnam during his time in the U.S. Army Cavalry from 1962-’76. “I was in Berlin most of the time,” he said. He characterized the welcome he received after leaving the military in one word: “Mediocre,” he said.

“Nobody spit on me, but nobody seemed to care,” he said. “I didn’t get a hand clap or a parade. We’re finally getting some of the recognition we deserved all along.”

Sonia Alford and Patricia Heffinger served as co-chairs of the parade committee. “We’ve been working on it since May,” Alford said. “We feel like the veterans need to be honored. They keep this country free and they don’t receive our thanks enough.”

“This event also provides community awareness to who our veterans are and what they do for us,” Heffinger said. “Hopefully, it will help the community understand what the veterans have done for us.”

Both chairs said that the event appeared to be growing every year, and both were thankful for the veterans who participated, the community that came out to support them, “and the weather,” Alford said.

Trooper G.W. Scott of the Virginia State Police marched in the parade, playing patriotic and religious selections on his bagpipes, and a rifle team from the Sons of Confederate Veterans built excitement in the crowd every time they fired their muskets into the air.

“We stand amid true patriots,” he said. He said that the veterans, their spouses and their children all sacrifice to serve the nation. “We need to give support to those who defend our freedom,” he said.

“We, as veterans, don’t ask for much,” he said. “All we ask for is a pat on the back and a thank you.” He said citizens can show support by hiring veterans or volunteering at a veteran’s hospital. He thanked everyone for giving him the opportunity to speak at the event.

11 a.m., at Mercer Funeral Home in Bluefield. A graveside service will follow at 3 p.m. at Glenwood Cemetery, Bristol, TN.