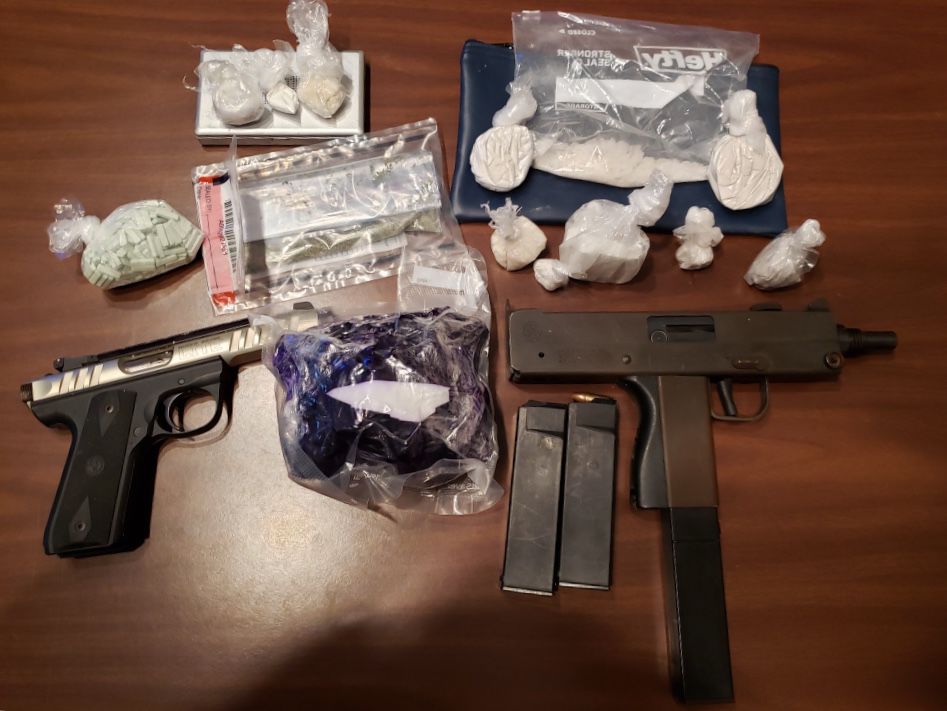 Drugs and firearms were found in a Princeton residence after police responded to a report of home invasion and robbery which officials are now calling a drug dealer versus drug dealer crime.

Drugs and firearms were found in a Princeton residence after police responded to a report of home invasion and robbery which officials are now calling a drug dealer versus drug dealer crime.

PRINCETON — Three men were arrested following an armed robbery at a Princeton area residence that officials are describing as a drug dealer on drug dealer crime.

The incident occurred Sunday morning when four men wearing ski masks and armed with guns robbed a residence on B Ray Street in the Princeton area, Capt. Joe Parks, with the Mercer County Sheriff’s Office, said.

“We caught two of them,” he said. “They were attempting to rob drugs out of the house.”

Jaquan Allen, of Statesville, N.C., and Jimmy Thornton, of Peterstown, are both charged with first-degree armed robbery, burglary and conspiracy, Cpl. M.S. Horn, lead investigator on the case, said.

Horn said Rodriguezvirella was dealing drugs, and Allen and Thornton, as well as the two at-large suspects, were attempting to rob him.

In his criminal complaint, Horn stated that Rodriguezvirella hid in his bathroom during the robbery.

Mercer County Sheriff’s officials, including Lt. S.J. Cary, Deputy M.R. Lacy, and Deputy M.C. Altice, responded to the scene when they received a report of the home invasion and robbery.

After arriving on the scene, the deputies pursued two subjects running from the area.

According to the criminal complaint filed by Horn, Thornton was unable to scale a fence and subsequently surrendered to authorities.

Deputies Lacy and Altice then deployed K-9 Axle to track Allen, the court document states. Allen was later located hiding between a house and plastic storage container in the Quail Valley Subdivision.

Deputies found a vacuumed sealed bag continuing illegal narcotics and a handgun in the area of the wooden fence where the suspects were first observed, according to Horn’s criminal complaint. Additional drugs were found across the fence.

During the investigation, deputies located more than a pound of methamphetamine, 317 Xanax tablets, more than two ounces of heroin, three ounces of crack cocaine, one ounce of powder cocaine and 15 grams of marijuana, Parks said.

Members of the Southern Regional Drug and Violent Crime Task Force assisted in the arrest and investigation.

In Sunday’s B Ray Street incident, Horn said it is believed that one of the robbery suspects is a drug dealer while the other three suspects are his clients.

11 a.m. at the Cravens-Shires Funeral Home Chapel in Bluewell. Entombment will follow at Roselawn Memorial Gardens in Princeton.

Robert Newton Hutchens, Sr., 77, of Falls Mills, VA passed away Monday February 24, 2020 at his home. Born in Pocahontas, VA he was the son of the late Bland and Grace Bise Hutchens. Robert was employed at Ammars in Bluefield, VA. In addition to his parents he is preceded in death by one son…