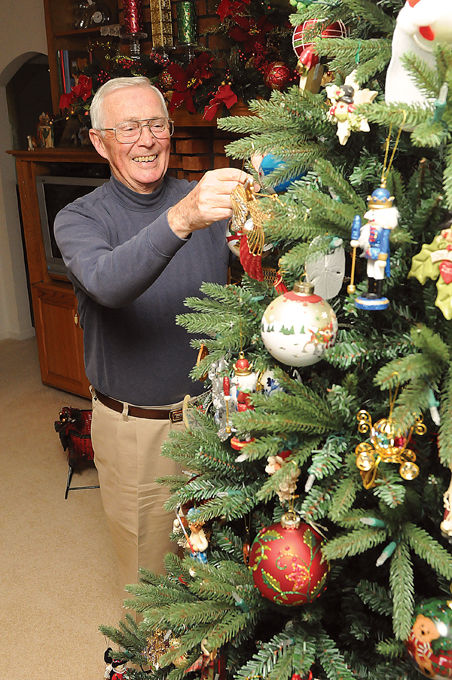 Don Rice gets into the holiday spirit as he decorates his Christmas Tree at his home in Bluefield, Va. Thursday. 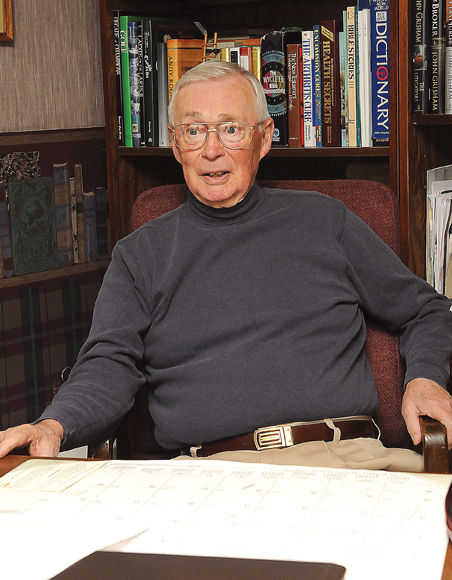 Don Rice gets into the holiday spirit as he decorates his Christmas Tree at his home in Bluefield, Va. Thursday.

“Most of my adult life I was in the toy business, it just sort of fit with my personailty and what I like do to. And wherever I’ve lived I’ve been very involved in charity work. It’s just the idea of helping the children,” Rice said. “It gives them a Christmas.”

Fortunately, Rice had a boss at American Plastic toys that was a former school board member and knew the importance of volunteering. “I’ve always been involved in volunterism and that type of stuff,” Rice said. “I enjoy working. I enjoy seeing the kids. Having been in the toy business, it sort of goes along with my personality. I like toys and I enjoy working with them. It’s nice to go out in the store and see something you helped make.”

The Little Jimmie Christmas project is sponsored by the Daily Telegraph and usually has around 75 to 100 volunteers from within the community. Fruit, candy, books, hats, gloves and toys are just a few of the things placed in a red bag for the children to pick up.

During the festivities, Rice works as the bag alignment director. “It takes about a half a day to line up and half a day to put all the hats and other things we have in it. I’ve been pretty much in charge of lining up the bags for at least 13 years,” Rice said.

According to Rice, the community is a big help to the program. “Some people come just to the party to help hand out the toys.”

Rice took a few minutes to explain the details of preparing for the Little Jimmie Christmas Tree program. “There’s a different organization that shops for each age group. Just take our Rotary group for example, we shop for 7-8 year olds. We go to Kmart and shop. Then Kmart stores the bags for us and for the other groups. Then Charlie Cole and his son, Chaz, they bring his enclosed trailer and pick all the bags up and bring them down to Bluefield City Auditorium. They unload them and they’re all mixed up. Each age group has a different colored ticket on it where the people signed up and they’re numbered. The bags are numbered and we know if a tag gets torn off. We sort the bags by age group and then we put the bags in numerical order.”

After they get the bags lined up, they are assigned a number and a ticket.

“So when the people come thru they have a ticket. They keep one and we have one and they have one on the bag. That way we can go right down thru there and put them in numerical order in rows. So that when the party starts, if you got bag 101 then somebody knows where it is because we have signs on the wall,” Rice said.

Most of the work for the Little Jimmie project is completed the day before.

“There are several people that help out on the day before. That’s when most of the work is really done is the day before. Getting all the bags in order and getting them ready.”

After the bags are all put in order, they are filled with Christmas goodies. The preparation day generally lasts from eight in the morning to four in the afternoon. Then comes the big day.

Technology has made the process much easier.

“They’ve got a system now, which is better than what it use to be. They’ve got a machine as they come in they take a number,” Rice said. “We get them through there in about 45 minutes.”

The Little Jimmie Christmas Project even arranges extra bags in case extra children show up. “To stay prepared, we buy two extra girls bags and two extra boys bags for each age group. In case something goes wrong or they don’t get enough in their bag. We have extra bags in case they lost this or that. We try to save those bags just for the spares. That’s basically how it works.”

Rice pointed out that some of the bags require special care.

“Sometimes you get a skateboard or sled and you have to fasten the bag on top of that. It won’t fit in the bag. And we have to make sure when people pick up their bag that they pick up that too. We try to tape it to it so that they know. The runners we have them when they get there, before the day of the party, to look around and see where you’re going to get a bag and you see one thats got something under or fastened to the side of it you make sure and get it. The bags are heavy and the stuff is fragile.”

In preparation for Christmas, no stone is left unturned.

“K-mart helps us with the batteries too. That’s another thing we have people do the morning of the party. We go through and see what needs batteries. We have cases of batteries and we put them in the bags. You know there’s nothing worse than a kid getting a toy with no batteries.

All the toys for the Little Jimmie Christmas are purchased from Kmart.

“We’ve got a couple of people that work in that toy department the day we shop. And that’s a big help.” When asked how toys have changed over the years Rice responded that “they’ve gone to more electronics and are more expensive. We’ve gone away from the Lincoln Logs and the stuff I had as a kid. Games are big. And of course dolls for girls. Makeup kits. I know puzzles and games and cds and footballs and basketballs. Alot of them ask for clothes, but that may be the mother.”

Rice believes it’s very important to help children in our community that are less fortunate.

“I think it’s very important. You see their faces when they see their bag. You know how their faces light up. And it makes it all worth it.”

The Bluefield Daily Telegraph, the East River Street Rods, and the Bluefield Rotary are just a few of the organizations that help with the project. “The people have supported this for I don’t know how many years. It’s strictly been run by the newspapers. So it’s not connected with Toys for Tots for the Marines or anything. It’s just been this community Christmas tree,” Rice said.

The Bluefield Daily Telegraph raises funds for the program.

“There will be an article in the paper asking for funds. It’s raised strictly by donation from the community and different organizations,” Rice said.

Rice was first introduced to the Little Jimmie Program 15 years ago by his local Rotary club which shopped for seven and eight year olds.

Last year, the project served 779 children in the area. The year before they helped 803. This year they’re planning to help up to 850 children.

Sunday November 23 the Little Jimmie Christmas Tree campaign will be launched on page one of the newspaper.

“People send in money in honor of someone. And then they put the names and amount in the paper,” Rice said. “They’ll be blessed if they help with the Little Jimmie Project. It’s a blessing to see the smile of the childrens faces when they pick up the bag. It makes it all worthwhile for the work and the effort that people put in.”

“There is no operational expenses. There’s nobody paid.” Rice said. “None of this money is spent on anything but the kids,”

The Little Jimmie Christmas project provides children with a Christmas in Bluefield and neighboring counties.

“The other part is, it’s a joy to see the high school kids help. It’s good for young people to get a sense of doing something for somebody else.”

Rice was formerly the Vice President and Treasurer of American Plastic toys in Michigan.

“I’ve been in the toy business for probably 40 years,” Rice said.

This years Little Jimmie Christmas will be held on December 23 at the Bluefield City Auditorium from noon to 1:30 p.m.

“We have 750 to 800 kids every year who have a nicer Christmas than they would have had,” Rice said. “There’s alot of them, the parents can’t afford to buy these kind of things and it just makes their Christmas. There’s still a big need in this area.”