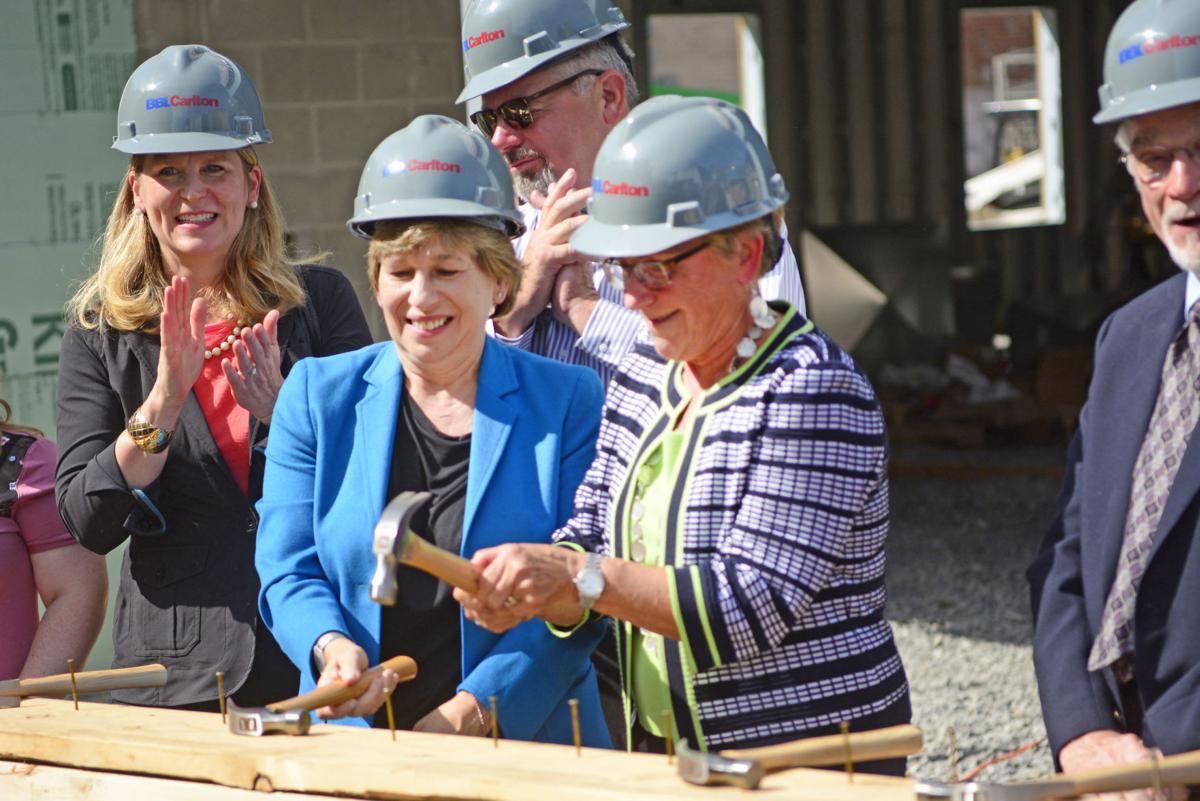 Gayle Manchin, right, chair of Reconnecting McDowell as well as former teacher and past chair of the state Board of Education, hammers a nail into a board at the groundbreaking ceremony for the Renaissance Village in Welch, Monday. Center is Randi Weingarten, national president of the American Federation of Teachers. Welch mayor Harold McBride stands behind them. 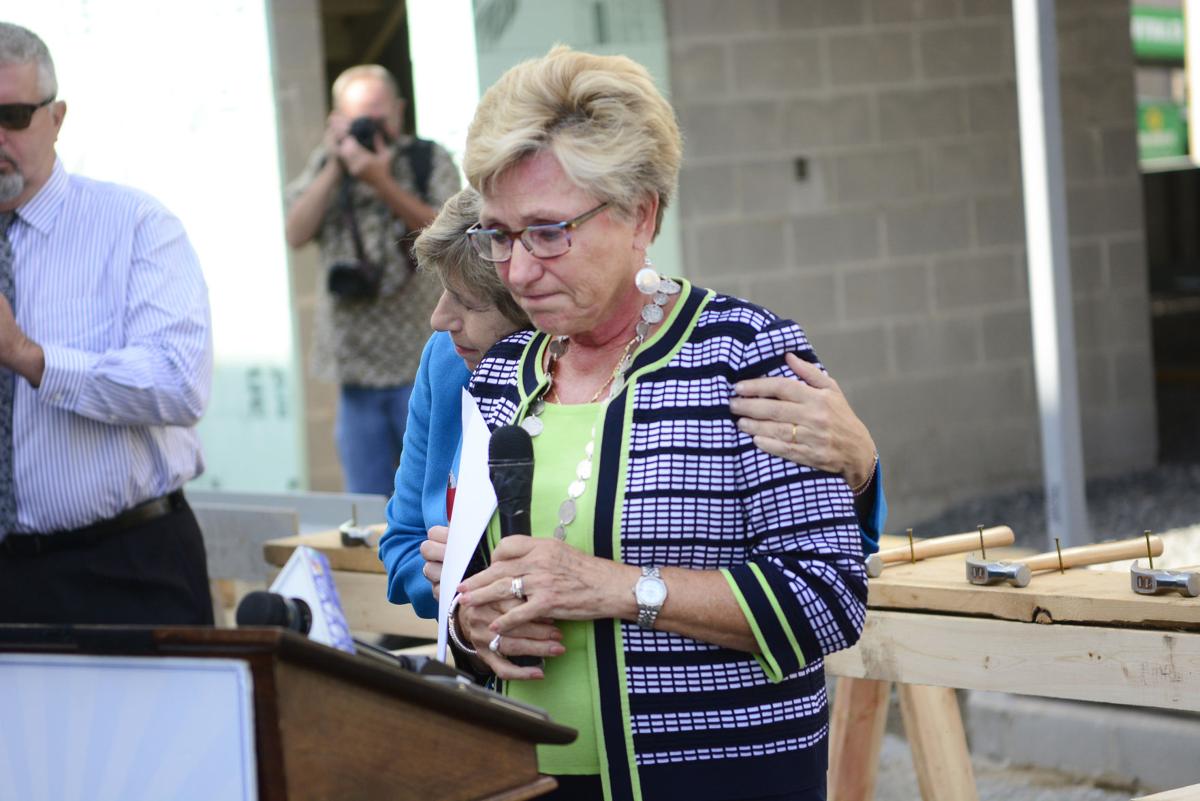 Gayle Manchin, chair of Reconnecting McDowell receives a hug from Randi Weingarten, national president of the American Federation of Teachers, as she gets emotional speaking about the Renaissance Village project.

Gayle Manchin, right, chair of Reconnecting McDowell as well as former teacher and past chair of the state Board of Education, hammers a nail into a board at the groundbreaking ceremony for the Renaissance Village in Welch, Monday. Center is Randi Weingarten, national president of the American Federation of Teachers. Welch mayor Harold McBride stands behind them.

Gayle Manchin, chair of Reconnecting McDowell receives a hug from Randi Weingarten, national president of the American Federation of Teachers, as she gets emotional speaking about the Renaissance Village project.

WELCH — Local, state and national dignitaries were in Welch Monday morning to celebrate the official groundbreaking of Renaissance Village, a housing project for teachers.

A $7 million project by the revitalization group Reconnecting McDowell, the four-story facility, which is located beside the movie theater in downtown Welch, will include 16 apartments designed specifically to house teachers, offering rental property at an affordable price.

It will also include retail commercial space.

Gayle Manchin, chair of Reconnecting McDowell as well as former teacher and past chair of the state Board of Education, led the event.

“We understood it wasn’t just about recruiting teachers, it was about giving them good reasons to stay like good housing,” she said. “So we said, that is going to be our major endeavor.”

Renaissance Village will be the first multi-story construction in Welch in more than 50 years, she added.

Reconnecting McDowell started in December 2011 as a partnership spearheaded by the American Federation of Teachers (AFT) and Manchin , and now includes more than 100 partners. It was designed to strengthen public education and small-town and rural communities by tackling the consequences of poverty and the exit of major industry.

One of the major problems in education has been recruiting enough teachers, with most of them living in another county because of the lack of housing in the county.

But the process to bring that major endeavor to Welch has been a long one, with construction planned for 2016 and then delayed by several factors, including raising money for the public-private partnership to finance it.

“We had a lot to overcome building a trust with people,” she said of the promises made over the years by various groups and projects that never came to fruition. “We weren’t here for the short haul. We weren’t here just for the first month. We were going to be here for the last month. Today, we are witnessing the beginning of this beautiful complex, Renaissance Village …”

Manchin said the village not only will provide good housing for teachers, but also a boost for economic development.

The project has been a collective effort, she said, and included the work of the former mayor of Welch, the late Reba Honaker, whose family attended the ceremony, as well as many other people who have worked behind the scenes to finally get the project off the ground.

“Thank you from the bottom of my heart as a West Virginian,” she said tearfully.

Randi Weingarten, national president of the AFT, also spoke at the event.

“This is a moment to express gratitude,” she said, adding that it’s also a call to action to continue to the good work happening in the county. “No one can do everything, but everyone can do something.”

“The rural way of life is worth fighting for,” she said. “I grew up in a small town, and it tears at so many of us to see small towns and rural areas abandoned by the market and other forces. The AFT is committed to doing our part and collaborating with partners to see that rural communities have equal access to education, high-quality healthcare, reliable public services, and an environment where people can gather, break bread and share stories. Not one school, not one hospital, not one post office, not one grocery store, should close on our watch. And we are committed, as we have done in McDowell and in Massena, N.Y., to use our knowledge and passion to help in other rural communities.”

Weingarten also praised Honaker, calling her a “beacon in this community” who was committed to Renaissance Village.

“We have heard from our teachers that they want to live in the community in which they teach,” she said of those teachers who commute from another county. “They want to be with students’ families …”

“It brings a lot hope and it brings a lot of other things also,” he said, adding that teachers who live in the city can see students in their environment and understand what they are going through and that makes education more effective. “You cannot put a money figure on that.”

McDowell County native and teacher Emily Hicks also spoke, and Manchin said Hicks became involved in Reconnecting McDowell when she was a student at Mount View High School who was determined to go to college and to be a teacher.

“Because of her, my last commencement address as a member of the State Board of Education was to her graduating high school class,” Manchin said. “To me, that was the greatest honor that could be bestowed …”

Hicks, who graduated from Bluefield State College in 2019 and from Mt. View High School in 2015, is a participant in Reconnecting McDowell’s Broader Horizons mentoring program and a special education resource teacher at Welch Elementary School.

Hicks agreed with McBride that it’s not just a building, “it’s another piece of our hope.”

If a teacher does not live in a community, there is a disconnect, she said, that impacts education because it makes it much more difficult to participate.

“This is a way for everybody to come together,” she said. “If there is somebody around who cares about our kids, then there will always be somebody who is pushing them … You have to have somebody who cares, and if they are closer to you, they have a better opportunity to care.”

Hicks said it’s time to see growth, not more businesses close, and the village will help.

“Reconnecting McDowell made an incredible difference in my life. It gave me confidence, hope and the spark to stay in McDowell and pay it forward by becoming a teacher myself,” she said.

Cecil Roberts, president of the United Mine Workers of America, was also in Welch and told the crowd gathered at the construction site that Manchin and Weingarten are “way too modest” and without their leadership many projects would not be done to help students and teachers not only in West Virginia but around the country.

Calling teachers the “future of the United States of America,” he said he is proud of what Manchin and Weingarten have accomplished with the Renaissance Village project as well as helping teachers work to get the the pay they deserve around the country.

“Teachers and the mine workers are one and the same,” he said. “Because without teachers coal miners’ kids could not have the education they deserve. Our kids in this state and in this area are as important as anybody’s kids whether they are millionaires or billionaires, a senator or governor or the richest person in the country. We love our kids just like you love your kids.”

Any time teachers have a problem in West Virginia or state, “We are going to march beside them,” he said, adding that teachers have stood behind miners and especially of miners’ rights to health care and pension funds they have earned.

Roberts also told the story related to the importance of education about a McDowell County 17-year-old high school student who was in Welch in 1960 to hear a U.S. Senator speak to a group of coal miners.

“He listened to this young Senator’s speech,” Roberts said, and when the Senator asked if anybody had a question “this young high school student” held his hand up and asked him what he thought about putting a man on the moon.

Roberts said the crowd was amused at such a thought.

“But that question got the attention of the miners who then paid more attention to the Senator, who asked the young man, ‘What would we do if we got to the moon, young man?’”

That young man said, “Why, we would just mine the heck out of it if we got up there.”

Roberts said that won the coal miners over as well as the Senator, whose name was John F. Kennedy.

The young man’s name was Homer Hickam, who went on to become a rocket scientist and one of the now famous “Rocket Boys.”

West Virginia Board of Education President Dr. Steven Paine did not address the crowd but attended the event.

“It’s an exciting day and a very heart-warming day for me,” he said. “I love the people of McDowell County. There’s a lot of history here. I can’t say enough good about the people here and this is an exciting development for the teachers.”

Paine said a lot of efforts are being undertaken in the county for education.

“This will certainly boost those efforts,” he said.

For McDowell County Schools Superintendent Carolyn Falin, the Renaissance Village can help solve an ongoing problem of a teacher shortage in the county, with 25 positions open and substitutes being used.

“We are here today to celebrate … the beginning of a new venture with the Renaissance Village for McDowell County,” said “We are excited. We are hoping this will provide new housing opportunities for prospective teachers and be the first step in attracting and retaining teachers.”

Affordable modern housing is difficult to find, she said. “This will provide teachers an opportunity if they want to stay in McDowell County.”

Del. Ed Evans (D-McDowell County) also attended the ceremony and said he is “thrilled about it.”

“One of the biggest problems we have in getting teachers is housing,” he said, adding that he is teaching as a full-time substitute to help out although he has already retired as a teacher.

“Hopefully this will bring some teachers in … and it can also serve as a hub for new activity downtown.”

Evans said having the village should spur more business development.

“This started several years ago and we are glad. It’s gong to bring an economic boom to downtown Welch,” McDowell County Commissioner Cecil Patterson said. “Hopefully, it will attract some good teachers for the school system. We are really looking forward to it and it looks like it’s moving along really fast. We are excited for the county and the City of Welch.”

The housing project should be ready in time for the 2020-21 school year.

Dignitaries drove in symbolic nails for the occasion as well as signed a steel beam that will be used in the construction, which began earlier this year.

The building will be managed by a new nonprofit called Renaissance Village Inc. Rent will be affordable, but the amount has not yet been set.