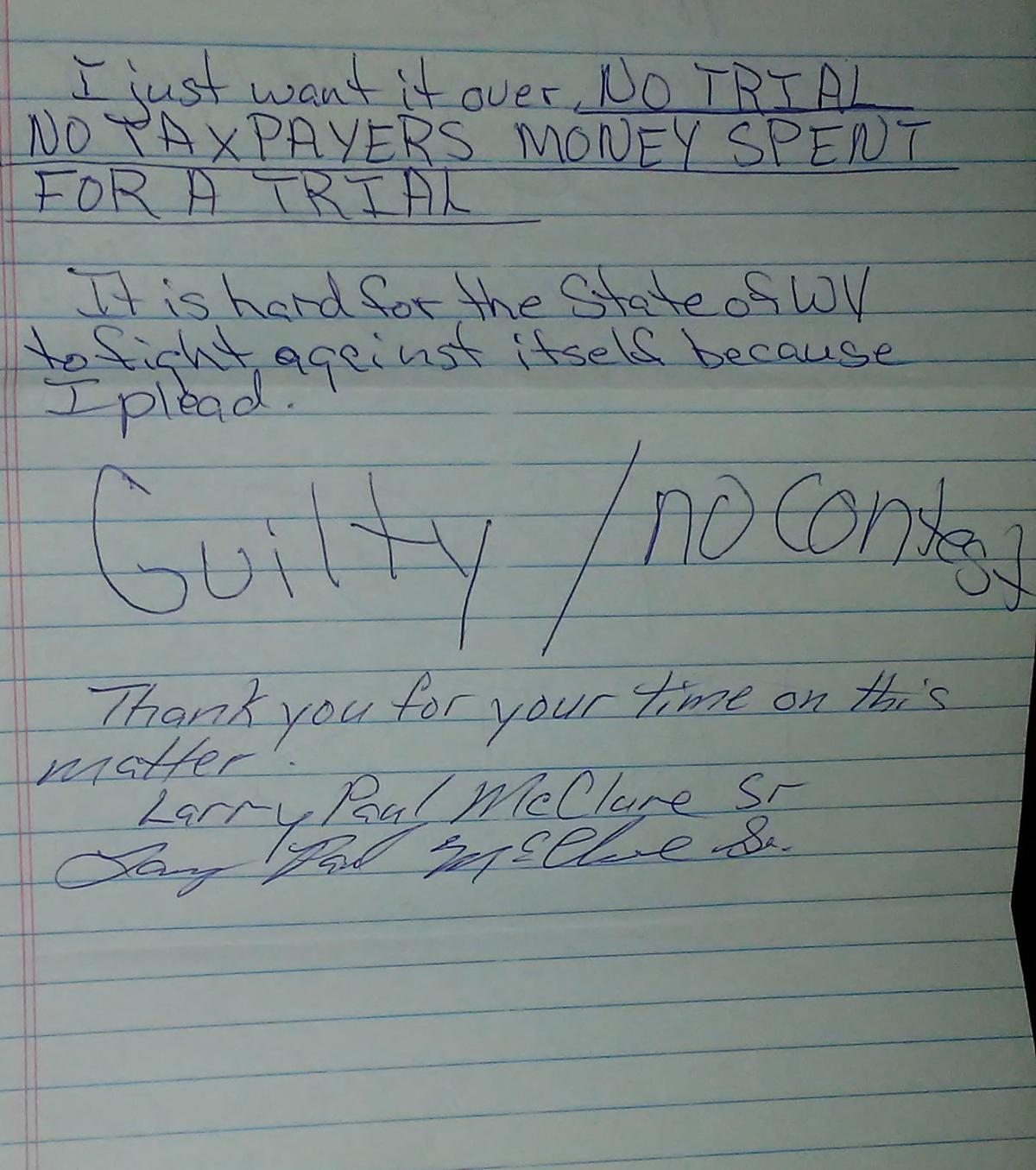 This photo shows the final page of Larry McClure’s confession letter. The letter reads, ‘I just want it over. No trial, no taxpayers money spent for a trial. It is hard for the State of WV to fight against itself because I plead guilty/no contest.’

Amanda Michelle Naylor McClure, 31, of Chicago City, Minn. has been charged along with Anna Marie Choudhary, 32, of Boone, N.C. and Larry Paul McClure Sr., 55, of Pendleton, Ky. with first-degree murder and conspiracy, according to criminal complaints filed by Trooper K.M. Saddler of the West Virginia State Police Welch detachment.

This photo shows the final page of Larry McClure’s confession letter. The letter reads, ‘I just want it over. No trial, no taxpayers money spent for a trial. It is hard for the State of WV to fight against itself because I plead guilty/no contest.’

Amanda Michelle Naylor McClure, 31, of Chicago City, Minn. has been charged along with Anna Marie Choudhary, 32, of Boone, N.C. and Larry Paul McClure Sr., 55, of Pendleton, Ky. with first-degree murder and conspiracy, according to criminal complaints filed by Trooper K.M. Saddler of the West Virginia State Police Welch detachment.

WELCH — A suspect in the grisly Skygusty murder has confessed to the crime in a letter to authorities. Meanwhile, information on an incestuous relationship between this suspect and his daughter, who is also charged with murder, has emerged.

Larry Paul McClure Sr., 55, of Pendleton, Ky., is charged with first-degree murder in the death of John Thomas McGuire, 38, of Minnesota.

McGuire’s body was discovered Sept. 24 in a grave at a Skygusty residence after a disclosure by McClure to West Virginia State Police officials.

Officials said McClure, a registered sex offender, told police where to find McGuire’s body after being arrested on a registry offense.

Testifying during a preliminary hearing for Choudhary on Nov. 5, West Virginia State Police Trooper K.M. Saddler said McGuire’s body was originally buried in the backyard of the Skygusty residence, however it was later moved to a side-yard location where it was discovered by police officials.

During the hearing, Saddler, lead investigator on the case, said all three suspects were involved in McGuire’s murder.

“On or about February 14, Mr. John McGuire was struck in the head with a bottle of wine, then tied up, and then injected with two vials of methamphetamine,” Saddler testified. “After the injection, he was strangled.”

In a letter to McDowell court officials dated Nov. 4, McClure confesses to the murder of McGuire and provides specifics of the crime. He writes in detail of McGuire’s suffocation/strangulation death, and lists the roles he and his two daughters played.

McClure also states he is willing to plead guilty/no contest to the crime.

McClure paints his daughter Amanda McClure as ringleader of the murder, but adds that he does not know her motive for the homicide.

“I am asking for this to be over and not waisting [sic} the taxpayers money and hurting the family members on both sides of this. John McGuires family and my family.

“All I can do is hope for mercy on this, but my sentence on this really does not matter because I am old and in bad health. I will never live to see the parole board in (15) years anyway and that is OK …

“I will say I am sorry for my part in this crime to both my family and John McGuire’s family.”

Court documents recently obtained by the Daily Telegraph reveal an incestuous relationship between Larry McClure and his daughter Amanda.

In a criminal complaint filed by Trooper Saddler, he writes that Larry McClure, Amanda Naylor McClure and Anna Choudhary did commit “the willful, deliberate and premeditated homicide of Larry McClure.”

Saddler also states the three did “willfully conceal the remains of Mr. McGuire in a shallow grave at Larry McClure’s residence located at 11715 Skygusty Highway located in the Skygusty area of McDowell County.”

A final paragraph in the criminal complaint also reveals a sordid relationship between Larry and Amanda McClure.

Three and a half weeks after the Valentine’s Day murder of McGuire, Larry and Amanda McClure traveled across the state line to neighboring Tazewell County, Va., where they married.

The marriage license shows the two were wed on March 11 by a United Methodist Church minster of the gospel.

The marriage license shows Amanda McClure listed the name of another man, and not Larry McClure, as her father.

Tazewell County Sheriff Brian Hieatt said the marriage of a father and daughter is illegal in Virginia. The crime is a misdemeanor offense punishable by up to six months in jail.

Hieatt said this crime has been in the books for “many, many years.” He speculated that the statute has not been updated recently because it “doesn’t draw attention … it’s something you just don’t see.”

Hieatt also said the marriage between Larry and Amanda McClure could spur an investigation by Tazewell County authorities.

McClure’s confession letter has been received by McDowell County court authorities, who said his attorney has also been notified of the letter.

On the last page of the missive, Larry McClure again confesses to the crime, writing, “I just want it to be over. NO TRIAL. NO TAXPAYERS MONEY SPENT FOR A TRIAL”

He printed and signed his name to the bottom of the letter.

Investigating Trooper Saddler said additional charges could be filed against the suspects.

“There will be further review of the case for more charges pending the grand jury indictments,” Saddler said, specifically citing the marriage “and other acts.”

Warren Mullins, 64, of Bland, VA, passed away Monday, March 30, 2020. He was born in Richlands, VA, the son of the late Luther & Maxie Osborn Mullins. He enjoyed outdoors, especially hunting, fishing and camping on the creek. He loved classic rock music. He was an avid NASCAR fan and Dal…