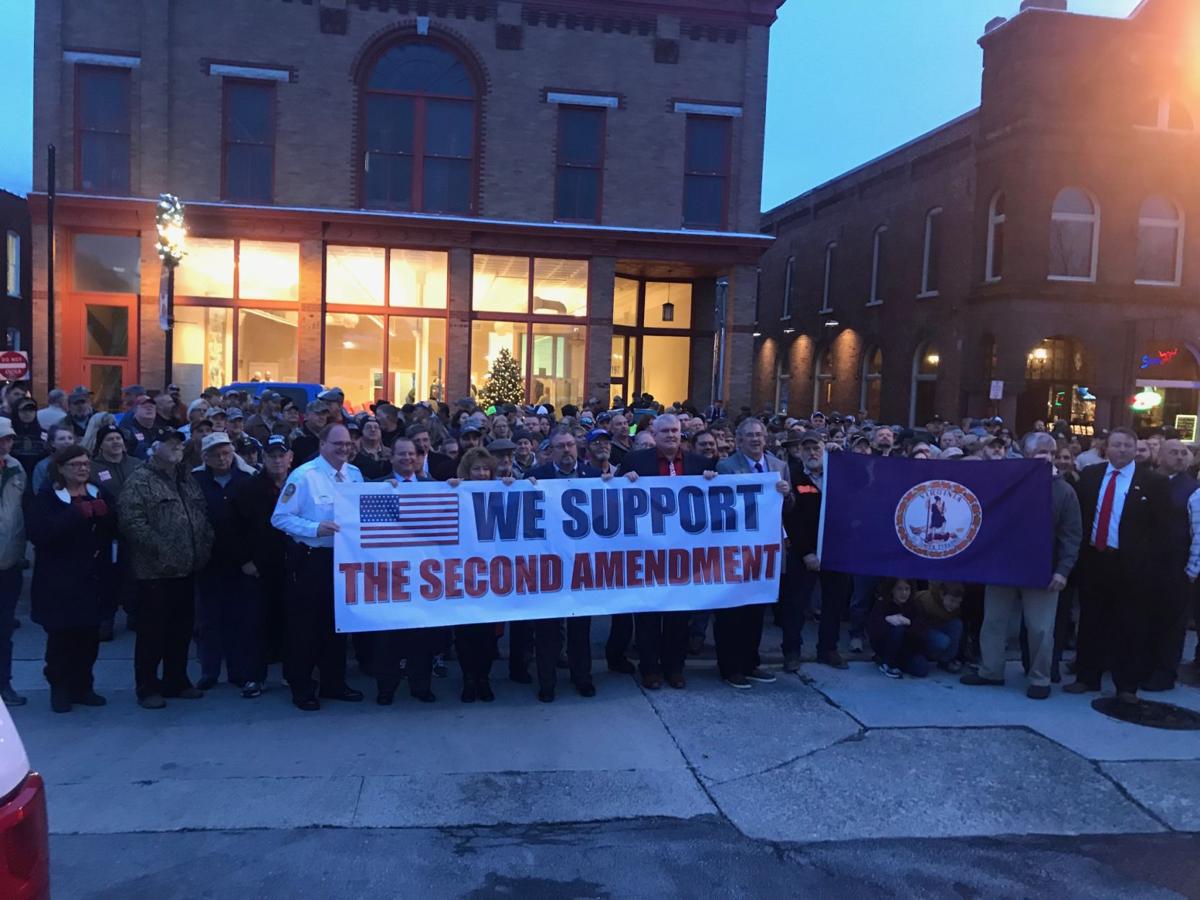 Tazewell County residents turned out in force Tuesday evening to show their support of resolutions declaring the county a Second Amendment sanctuary. After supervisors unanimously passed the resolutions, everyone gathered on Main Street for a photo of solidarity. 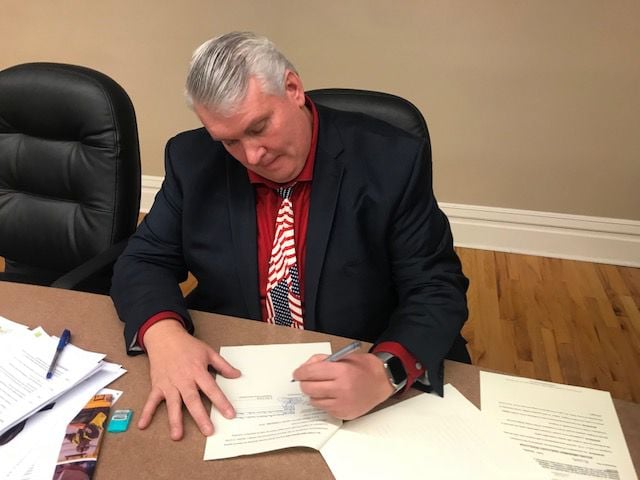 Tazewell County residents turned out in force Tuesday evening to show their support of resolutions declaring the county a Second Amendment sanctuary. After supervisors unanimously passed the resolutions, everyone gathered on Main Street for a photo of solidarity.

The board of supervisors unanimously passed two resolutions related to the designation, which means the county supports the rights of residents to keep and bear firearms and also will take legal means to fight any “unlawful” legislation imposed on the county.

Tazewell County now joins many others across the state to take a stand on gun right protections.

The sanctuary movement started after the November election when Democrats gained control of both the Virginia House and the Senate. Gov. Ralph Northam, also a Democrat, has said he wants to enact more gun control laws.

County attorney Chase Collins read the resolutions before a vote was taken.

The first resolution says the county will “vigorously uphold” the Second Amendment and residents’ right to keep and bear arms and that the Constitution of Virginia is “substantively equal to the Second Amendment, wherein the right to regulate the arms is placed upon the locality that orders the militia.”

Other provisions include in the first resolution include eliminating funding for “enforcement of any laws or regulations which would unconstitutionally infringe upon rights of Tazewell County’s law-abiding citizens to keep and bear arms, in accordance with the full breadth of the Second Amendment and … the Constitution of Virginia.”

Second Amendment Sanctuary Resolution number two also states the people’s right to a “well regulated militia” and the right of people to keep and bear arms without infringement. Not only that, it spells out the local reaction to any legislation introduced before the 2020 session of the state General Assembly that may infringe on those rights.

Those actions, if Second Amendment rights are infringed upon by an “unlawful act” by the state, include:

• Not participating in enforcing an unlawful act regarding personal firearms, firearm accessories or ammunition.

• Not utilizing any Tazewell County funds or assets to engage in any activity that aids in the “enforcement or investigation relating to an unlawful act in connection with personal firearms, firearm accessories or ammunition.”

• Declaring any unlawful act “invalid” in Tazewell County, defining unlawful as “any federal or state act, law, order, rule or regulation which bans or effectively bans, registers or effectively registers, or limits the use lawful use of firearms, firearm accessories or ammunition (other than those laws already in place…).”

Those unlawful acts (that go beyond laws already in place) may include, the resolution says, any new tax, fee, levy or stamp imposed on firearms, accessories or ammunition; any registration or tracking of firearms, accessories or ammunition or any tracking of their owners; any act forbidding the possession, ownership, or use or transfer of any type of firearm, firearm accessory or ammunition by citizens of legal age, other than abiding by the current federal laws already in place; and any act ordering the confiscation of firearms from citizens except as currently provide by law (those convicted of a felony, for example).

Eastern District Supervisor Charlie Stacy cautioned that the resolutions do not apply to current gun laws already in place.

“What we are doing here tonight does not in any way, shape or form negate or nullify any law currently on the books in the Commonwealth of Virginia or in the United States,” he said. “These resolutions are designed to prevent laws that may be passed in the next session of the General Assembly.”

Northern District Supervisor Maggie Asbury said supervisors don’t always agree, but on this issue “it was unanimous from the get-go.”

“There was never a question in our mind that we wanted to do the right thing,” she said, echoing fellow supervisors that the solidarity will send a message to Richmond about passing any gun laws that don’t pass constitutional muster.

Southern District Supervisor MIke Hymes said he was honored to make the motion to pass the resolution to make Tazewell County a Second Amendment sanctuary.

“The residents of Tazewell County showed up in force tonight to support our board’s resolution and it proves our board and the county residents are on the same page regarding the Second Amendment rights of our citizens,” he said. “We hope this sends a strong message to our state government that our board will not support any laws which negatively impacts residents’ gun rights.”

Chair Travis Hackworth talked about the importance of having a country where residents are “under arms” and create a force that any foreign country would hesitate to invade.

“What I heard from my board is, ‘We want to do something,’” he said. “We drafted a resolution that will do something,” referring to the actions spelled out if the state tries to impose any gun control measures that are unconstitutional, including going to court to stop them.

Young called signing the resolutions the board’s “John Hancock moment,” and he hopes the voices are heard in Richmond.

Sheriff Brian Hieatt also spoke and said he strongly supports citizens’ right to bear arms and he praised the board for taking a stand.

Hieatt said he is sometimes asked by residents if he or his deputies would ever come and take their guns.

“My response has always been, ‘First, I would like to know who is coming to take my guns?’” he said, adding that he has his own personal guns he has purchased and he’s made sure his children have learned how to use them. “I am not coming to do that (take any law-abiding citizen’s guns).”

Hieatt showed the crowd a sign he has on his door that says, “Free Men Need Not Ask Permission To Bear Arms.”

“This is something our Sheriff’s Office strongly believes in,” he said.

Chris Plaster, Tazewell County Commonwealth’s Attorney-elect, also addressed the board and residents and reiterated Stacy’s point that “if it’s a crime today, it will still be a crime after this resolution is passed.”

“That’s not why we are here tonight,” he said, adding that’s it an issue that crosses political lines around the state and helps people join together to fight for a basic right.

Plaster said he promises he will do all he can in his position to protect citizens’ liberties.

One resident spoke in opposition to the resolutions, saying they “missed the mark” by not considering the possibility and viability of “common sense” gun laws and the mental health and social aspects of the causes of gun violence.

Supervisors voted unanimously to pass both resolutions and asked officers to block off Main Street in front of the supervisors’ meeting room for a group photo to show solidarity.

Tazewell joins most other counties in the region with the designation, including Giles, Bland, Buchanan, Wythe and Russell. The Town of Bluefield, Va. is considering it, with a vote expected at the council’s Dec. 10 meeting.

According to the Virginia Citizens Defense League (VCDL), which has been pushing the resolutions, 31 counties and two cities now have the designation with others considering it.

At one time confined to western counties, the move is now spreading throughout the state, including counties in the Tidewater region and Northern Virginia, like Loudon County, according to the VCDL.

Northam has said dealing with gun violence is a top priority for his administration and he wants to pursue “common sense” gun controls including background checks on all gun sales and trades, a ban on selling assault weapons and the reinstatement of the one handgun a month purchase law.