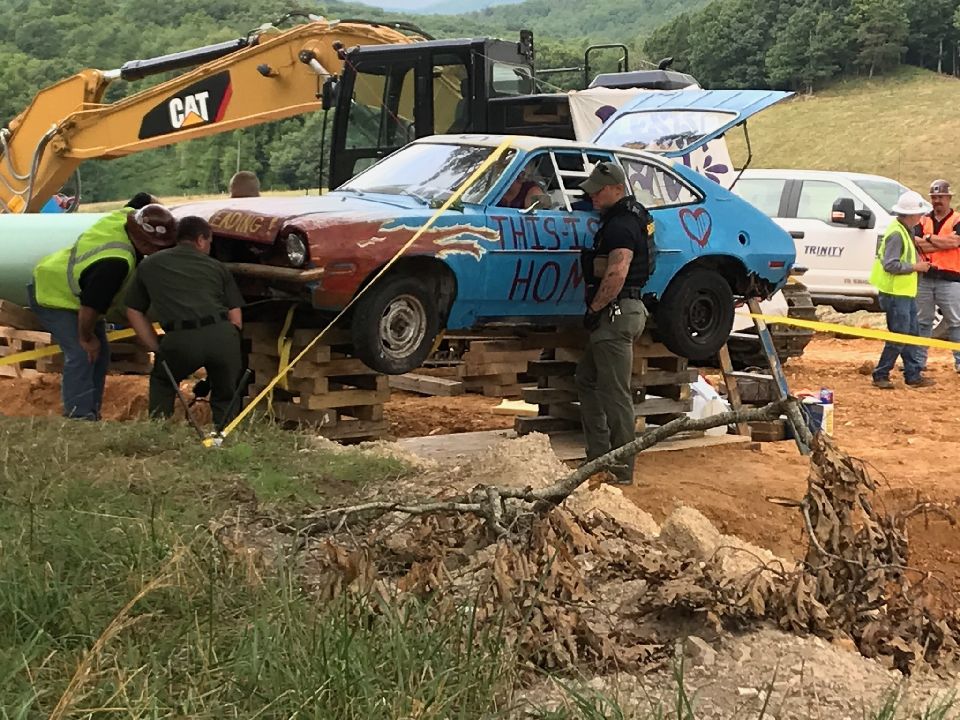 Novelist Becky Crabtree of Lindside was charged with obstructing a law enforcement officer after positioning herself inside a 1971 Ford Pinto that had been placed on top of wooden block columns. 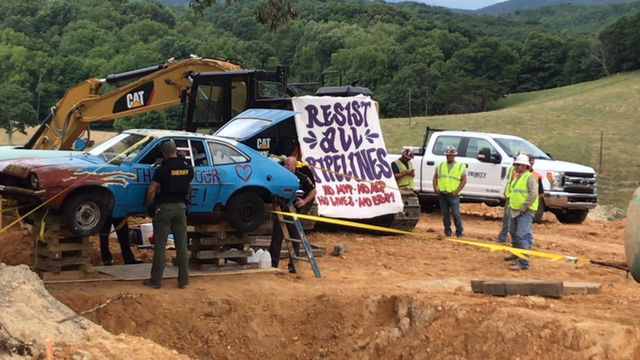 Becky Crabtree of Lindside sits inside her 1971 Pinto as police plan a safe way for her to exit Tuesday morning. The Pinto had been placed on columns of wooden blocks overnight at a spot in the middle of a ditch that is being used to install sections of a 42-inch diameter natural gas pipeline. Crabtree owns the land she and the Pinto are on, but the Mountain Valley Pipeline has an easement. She was charged with obstruction of a law enforcement officer and released later Tuesday on a personal recognizance bond.

Novelist Becky Crabtree of Lindside was charged with obstructing a law enforcement officer after positioning herself inside a 1971 Ford Pinto that had been placed on top of wooden block columns.

Becky Crabtree of Lindside sits inside her 1971 Pinto as police plan a safe way for her to exit Tuesday morning. The Pinto had been placed on columns of wooden blocks overnight at a spot in the middle of a ditch that is being used to install sections of a 42-inch diameter natural gas pipeline. Crabtree owns the land she and the Pinto are on, but the Mountain Valley Pipeline has an easement. She was charged with obstruction of a law enforcement officer and released later Tuesday on a personal recognizance bond.

LINDSIDE — A retired Monroe County writer is now free after being arrested at a work stoppage site along the Mountain Valley Pipeline route near Lindside Tuesday morning.

Novelist Becky Crabtree of Lindside was charged with obstructing a law enforcement officer after positioning herself inside a 1971 Ford Pinto that had been placed on top of wooden block columns directly in the path of the large ditch where workers have been installing the 42-inch diameter natural gas pipes that will carry natural gas from north central West Virginia to Chatham, Va.

West Virginia State Police and deputies with the Monroe County Sheriff’s Office were on the scene and eventually helped Crabtree exit the vehicle safely from the rear.

The car was then removed onto a rollback.

Crabtree was arraigned Tuesday afternoon in Union before Magistrate Kevin Miller, who set a $1,000 bond but released Crabtree on her personal recognizance.

The charge is a misdemeanor, he said, and carries a penalty of a fine between $50 and $500 and up to a year in jail.

With the bond, Miller told Crabtree she cannot have any contact with MVP personnel or engage in any further impediment regarding the pipeline’s progress.

“You can’t be an aggressor,” he said.

“I have no quarrel with you, the county police or the state police,” she said. “Just the pipeline.”

“Everybody has a right to their opinion and to protest,” Miller said.

Crabtree and the Pinto were on her own property, but the MVP had obtained an easement through her property for the pipeline.

Crabtree has long opposed the pipeline and the easement and said after she was released that she tried protesting in the usual methods, but to no avail.

“I feel my government has let me down by approving this unneeded MVP pipeline,” she said. “I have run through three years of letter-writing, petitions and court cases to try to stop it with conventional methods.”

But those methods don’t always work.

“Today’s effort was a bit extraordinary but these are extraordinary times,” she said. “Pintos are obsolete and so are fossil fuels!”

Crabtree’s husband Roger and daughter Papi Crabtree were on hand to watch events unfold at the work stoppage with about a dozen or so other supporters. People can legally be on Crabtree’s property with permission, but not step into the easement.

Roger Crabtree said the Pinto was his wife’s first car.

“It’s a 1971 Runabout,” he said, adding the car was impounded but he hopes to get it back.

Crabtree expressed concern when he saw what appeared to be pipeline workers around the car working on the process of helping his wife leave.

When he approached State Troopers about it, they assured him that his wife’s safety was the first priority and the workers did not assist again. The officers completed the job, making sure the car was stable before Becky Crabtree exited.

She was not handcuffed and walked to the waiting State Police vehicle with troopers.

“It honestly does not surprise me,” Papi Crabtree said of her mother’s protest. “She is very passionate about this. She still considers it (the easement) her land and her car.”

Crabtree said the Pinto has always been around.

“I remember riding in it when I was teeny-tiny,” she said.

Neighbor Wanda Buchanan was on the scene, offering her support.

She has opposed the pipeline from the beginning, she said, and had encountered a “rude” attitude when she initially thought part of her land would be impacted.

“I have no faith in anything they say,” she said of the company representatives. “They just take your land.”

That support was one of the reasons Betty Hahn of Montgomery County was also at the site of the work stoppage.

“I have been involved (in fighting the pipeline) for four years, since I first heard about it,” she said. “We all went through the so-called proper channels.”

Hahn said the government and all the agencies that play a role in the permitting process for the pipeline have “failed” the people.

That resulted in the “non-violent, direct action resistance,” she said of Crabtree’s protest as well as others, including tree sitters in Monroe, Giles and Montgomery counties.

Those tree sitters are now all down but they placed themselves directly in the path of the pipeline until all food and water supplies were blocked.

Hahn said she has “cautious optimism” after a 4th Circuit Court of Appeals in Richmond last week stopped pipeline work in national forest property because of improper permitting by the U.S. Forest Service and other agencies.

The ruling impacts 3 1/2 miles of the 300-mile route, she said, but it’s across Peter’s Mountain (bordering Monroe and Giles counties) and that would make it very difficult and expensive to reroute.

Hahn is also upset with what she calls a “blanket permit” for the rest of the route, a permit she thinks should be revoked because of the mountainous terrain and danger the pipeline poses.

“There have been explosions (at other natural gas pipelines),” she said, adding that the water supply could also be impacted as well as the rest of the environment in its path.

When Crabtree was in magistrate’s court, several of her friends were there.

“She is an amazing lady,” said Nancy Bouldin of Greenville, who has also been involved in opposing the pipeline.

Bouldin, who is with the Indian Creek Watershed Association and lives not far from where the pipeline would cross Indian Creek, said at a pipeline meeting last year that water quality is an issue.

“The concern is the water,” she said, adding that springs and caves could be impacted, which also makes the stability of the line questionable.

“It seems like they are ignoring this (in the Environmental Impact Study),” she said.

Sen. Mark Warner, D-Va., said during a visit to Tazewell County recently that he has had concerns about the permitting process of the pipeline and whether there is a need for two, the MVP and the Atlantic Coast Pipeline, which runs from the same fracking wells in West Virginia but on a route in the northern parts of West Virginia and Virginia.

The pipelines should have been looked as a whole rather than on a regional basis as far approval by the Federal Energy Regulatory Commission (FERC) is concerned, and whether both pipelines are needed, he said.

“The process should have been more transparent,” Warner said, adding that public input should have also been taken into consideration more and the process also leaves people wondering if FERC is simply providing a rubber stamp approval for these projects.

The MVP was initially scheduled to be finished this year, but that timetable has been moved to next year.

As far as any response to the protests by MVP, the company has issued several statements saying all state and federal environmental laws and regulations are being followed and sites are monitored.

Work on the pipeline in Virginia was recently suspended temporarily as the heavy rainfall caused drainage problems along the pipeline route.

But for landowners who have to contend with what they consider an “unwanted” use of their property through eminent domain, it’s personal.

Crabtree, a Glenwood native who has three novels published as well as a biography of a Bluefield State College president who was an icon, the late Dr. Henry Lake Dickason, said it is very personal because it crosses the land she bought for its pristine beauty.

And, as with some other protesters, it has created a situation where she is doing things she never anticipated.

Maybe Crabtree summed up her protest best when she was talking with officers before leaving the Pinto.

Bluefield, WV- Mary Frances Haynes, 93, of Bluefield passed away on March 30, 2020. She was born September 9, 1926 in Detroit, MI. She was the daughter of the late Richard LeRoy and Eva Brooks Haynes. In addition to her parents, she was preceded in death by a brother, Robert LeRoy and his wi…

Bluefield, WV- Beatrice Shanklin of Bluefield, WV died Monday March 30, 2020 at Bluefield Regional Medical Center. Born February 26, 1943 at Rocky Gap, VA, she was the daughter of the late Wesley Showalter and Laddie Showalter. In addition to her parents, she was preceded in death by her hus…