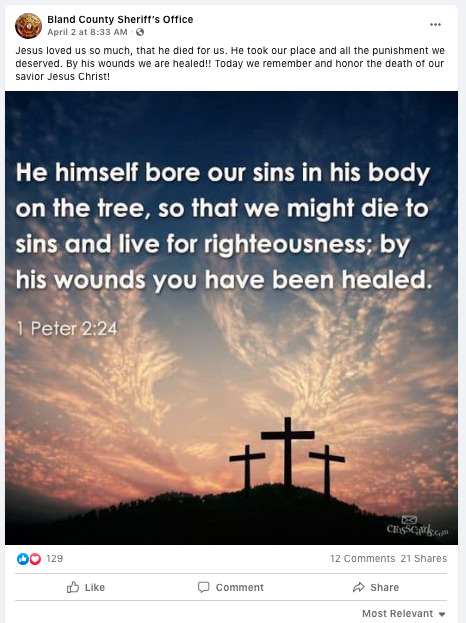 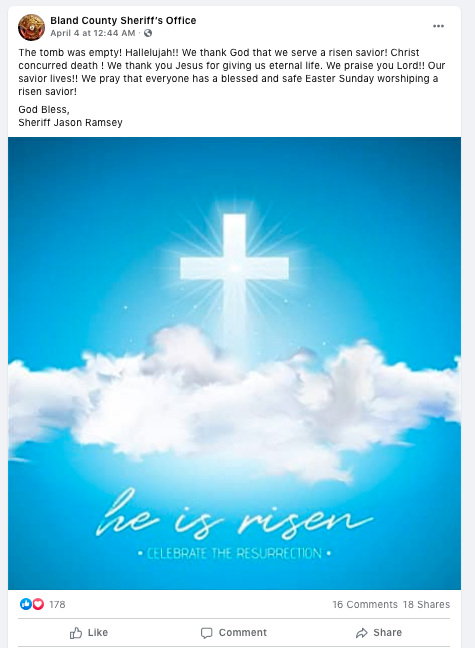 BLAND, Va. — A Wisconsin-based organization is urging the Bland County Sheriff’s Office to stop a “pattern” of posting religious messages on its official social media account.

An example used in the letter was from a post in early April featuring a Latin cross with the message, “He is risen – celebrate the resurrection,” along with the caption:

“The tomb was empty! Hallelujah! WE thank God that we serve a risen savior! Christ concurred [sic] death ! We Thank you Jesus for giving us eternal life. We praise you Lord!! Our savior lives!! We pray that everyone has a blessed and safe Easter Sunday worshiping a risen savior!

Chris Line, FFRF staff attorney, said in the letter, which was prompted after a complaint from a local resident, that it is “inappropriate, exclusionary and indeed illegal for the sheriff’s office to promote religion on social media. Government employees, FFRF explains, can worship, pray or quote any religious text they wish when acting in their personal capacities, but are not permitted to lend the power and prestige of their government office to their personal religion.”

“Citizens interact with and rely on law enforcement officers during some of the more urgent and vulnerable times in their lives,” he said. “Religious endorsements coming from the sheriff’s office needlessly alienate the non-Christian and non-religious citizens in Bland County, turning them into political outsiders in their own community.”

The foundation also said the department’s promotion of Christianity “needlessly exposes Bland County taxpayers to costly legal liability. Not long ago, the sheriff’s office in Bradley County, Tenn., paid more than $40,000 in damages and attorneys’ fees after promoting religion on social media and ignoring objections to the practice.”

Ramsey could not be reached for comment on Wednesday.

A lawsuit filed by FFRF against Mercer County Schools in 2017 against the school system’s Bible in the Schools program eventually resulted in the termination of the 75-year-old program, which the FFRF said was unconstitutional because it “endorses one religion, improperly entangles public schools in religious affairs, and violates the personal consciences of nonreligious and non-Christian parents and students.”

The FFRF said any government entity that promotes one religion over another violates the Establishment Clause of the Constitution, which sustains the separation of church and state.