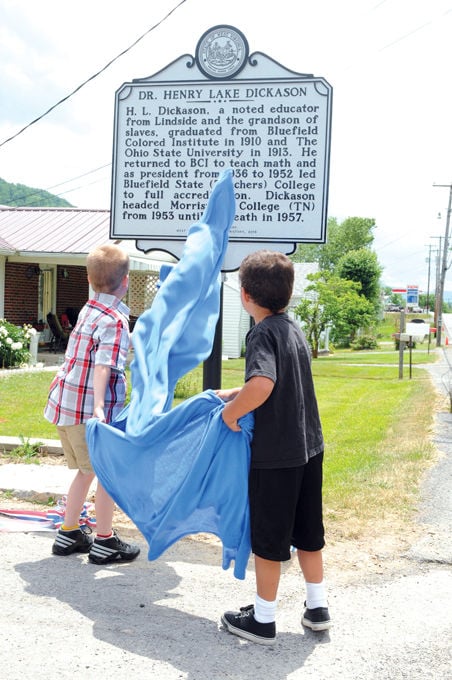 Clark Adkins and Moses Hopkins unveil the marker at the corner of U.S. Route 19 and Spruce Run Road in Lindside honoring the life and accomplishments of Dr. Henry L. Dickason. 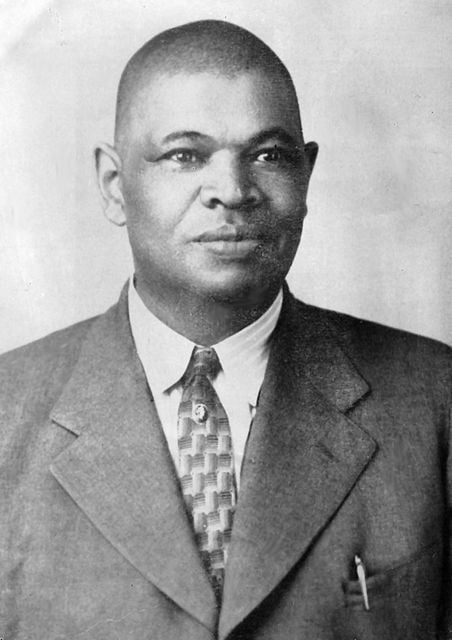 Clark Adkins and Moses Hopkins unveil the marker at the corner of U.S. Route 19 and Spruce Run Road in Lindside honoring the life and accomplishments of Dr. Henry L. Dickason.

LINDSIDE — The Peters Mountain Chapter of the Daughters of the American Revolution brought a little-known story to light on Sunday, and in so-doing, filled in some of the blanks in the story of one of Bluefield State College’s most dynamic leaders — Dr. Henry Lake Dickason.

He was the grandson of slaves who were freed and inherited the Monroe County property of their owner, Jacob Dickason.

After he graduated from (then) BCI, Dickason entered Ohio State University in Columbus, Ohio, where he earned an undergraduate and masters degree. During his stay at OSU, he became active in the Alpha Phi Alpha fraternity, and was elected to serve as the fraternity’s national president from 1914-15.

Dickason returned to BCI where he served as vice president until 1936 when Robert Page Sims retired after serving 25 years as principal of BCI, and five years as president of Bluefield State Teachers College. Sims had followed BCI’s first principal, Hamilton Hatter.

During his tenure, Dickason worked with the state legislature to change the name of the school from Bluefield State Teachers College to Bluefield State College, a feat that he accomplished on March 5, 1943, with a bill passed by the legislature, according to BSC’s 1945 annual. Dickason also led efforts to get the college accredited, and brought influential African Americans of the 1940s through 1953 including Joe Louis, Langston Hughes and Edward “Duke” Ellington to the campus, Crabtree said.

William Broyles was a neighbor of the Dickason family. He said he saw Dickason when he visited the family following his (Broyles) father’s death. “I was 11 years old at the time,” Broyles said after the ceremony. “I remember him as being soft-spoken, a kind man who was devoted to education. He asked the other black people who lived around Lindside to come to school at Bluefield State and continue their education.

“I remember that every time he returned home to go to the farm, he would come back in a new Buick but park it in the garage here in town, and drive out to the farm in his old Buick,” Broyles said as he pointed to where the car dealership was in Lindside. “When he went back to Bluefield, he would come back to the garage, switch out cars and drive back in his new Buick.”

Nancy Kornegay, regent of the Peters Mountain Chapter, DAR, welcomed the audience of more than 75 people to the ceremony. She led those assembled in reciting the “Pledge of Allegiance to the Flag” and “The America’s Creed.”

Barbara M. Frankenberry, state regent of the West Virginia DAR, brought greetings on behalf of the state. She characterized Dickason as one who “touched peoples’ lives.”

The Reverend Brent Brown, pastor of Lindside United Methodist Church, gave both the invocation and the benediction and Brenda Huffman sang “My Country ‘Tis of Thee.” Moses Hopkins and Clark Adkins performed the actual unveiling of the historical marker that is located at the intersection of U.S. Route 219 and Spruce Run Road in Lindside.

PRINCETON - Roseanna Star Barnhill, 67 of Princeton, went to be with the Lord on Tuesday, August 11, 2020, at Princeton Community Hospital following a sudden illness. To view complete obituary, please visit www.memorialfd.com. The Barnhill family is being served by the Memorial Funeral Direc…