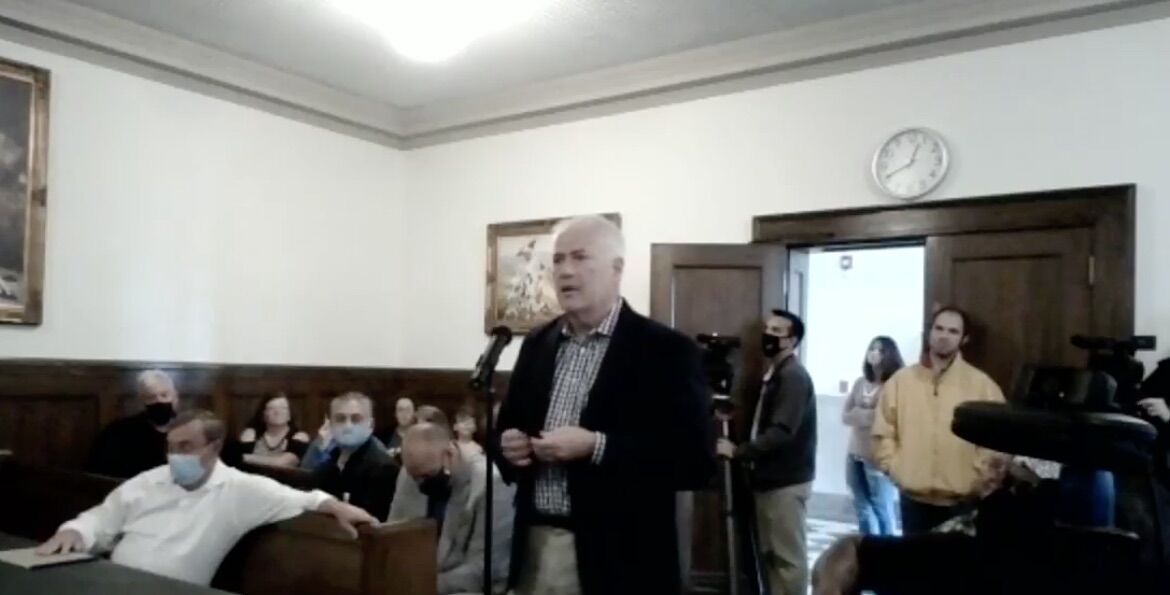 Delegate Marty Gearheart, R-Mercer, was one of many speakers who addressed the Mercer County Commission Friday.

PRINCETON — The mask mandate for Mercer County has ended.

The Mercer County Commission voted 2-1 Friday to end the county Board of Health’s mask mandate. That means it won’t be extended for another 60 days, as the Board of Health recommended earlier this week.

Board of health members approved a 30-day mandate, which included mask wearing in all indoor public buildings and outdoors when social distancing cannot be maintained, on Sept. 22.

However, the county commission is required by a new law to approve any new action by the board of health within 30 days, so with the rejection the mask mandate has expired and will not be extended.

Commission President Gene Buckner said the mandate was never officially put in place in the first place because proper protocol was not followed.

That included proper posting of a mandate and giving public notice of a vote, neither of which was done.

Commissioner Bill Archer made the motion to discontinue the mask mandate because there is no mechanism in place to enforce it anyway.

Greg Puckett, the other commissioner, was the only one opposed and recommended all county agencies work together and continue the mask recommendation and pool resources to do all that can be done to educate and prevent the spread.

Puckett urged the board of health to revise the mandate for only 30 days, but reevaluated weekly, based on updated data.

The Board of Health initially made the move because at the time the county was experiencing a sharp spike in new Delta variant cases as well as hospitalizations. However, those numbers have dropped steadily during the last month.

Several speakers Friday said they opposed any mask mandate at all.

Jennifer Oliver, a registered nurse, also said proper protocol was not followed and the mandate was never valid in the first place.

Oliver said it should be an individual decision and parents should be the ones responsible for decisions related to their children.

Delegate Marty Gearheart, R-Merer County, spoke against the mask mandate, also pointing out that it is a person’s individuual responsibility to take care of their own health.

He also said he has had hundreds of calls on the issue and all were against the mandate, and not one person supported it.

Other speakers pointed out the negative impact on businesses and that mandates can be counterproductive because people don’t like to be told what to do.

Many of the arguments against centered on freedom of choice and that people should be free to choose for themselves.

On Wednesday, the board voted 3-2 for the 60-day extension, citing continued cases as well as issues with hospitalizations.

“It’s not over yet,” board member Stacey Hicks said of the pandemic, and wearing masks have shown they help stop the spread.

Archer said the Board of Health has the option to try again with a mask mandate and follow the proper procedure in doing so.

But Hicks said as far he is concerned the board does not intend to bring back the issue, and he disagreed about the board not following protocol.