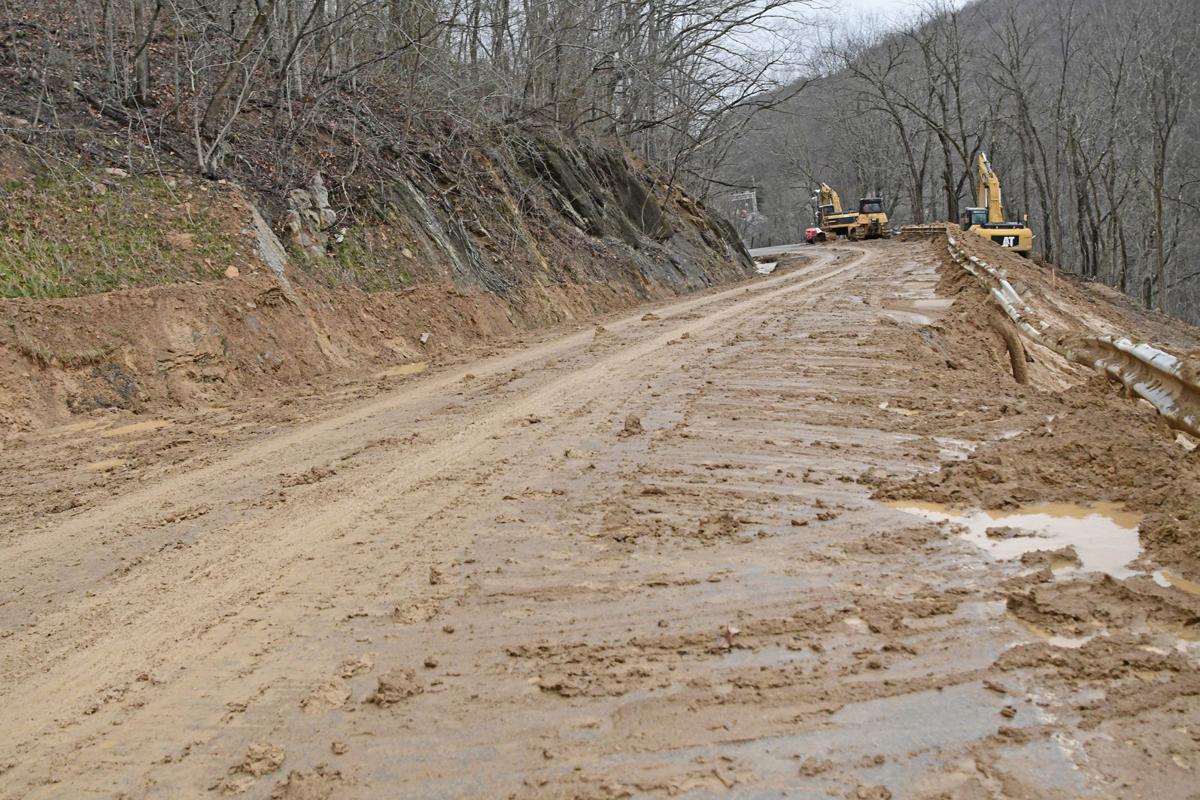 Mud still covers a section of Ingleside Road off Country Girl Road in Bluefield where a landslide caused by heavy rainfall forced highway officials to shut the road down earlier last week.

BLUEFIELD — Nearly a year after the first, residents in the area of Country Girl Road are facing a second massive landslide.

After the area was hit with an onslaught of rainfall, the land remaining after the first slide plummeted down the mountainside. This is causing an issue for residents in more ways than one.

With mud and debris in the roadway, the Department of Highways (DOH) blocked Ingleside Road to through traffic. This, however, has not stopped travelers, according to area residents.

Mary Croy, who’s family lives dangerously close to the area of the mudslide, states that drivers are moving DOH barrels from the roadway. After moving the barrels motorists are then driving over the portion of the landslide that’s in the roadway.

“By people driving over it, my family is afraid it’ll [the landslide] fall over. It would bury my family alive,” Croy said.

Now facing a landslide for a second time, Croy’s family is fearing the possibility of further damage. With the ever-present threat of land toppling upon their home, Croy is scared that her family is stuck in a dangerous situation.

“They were there when the first one fell. When is it too much? When will someone tell them to move?” Croy said.

In February of 2019 heavy rainfall caused the land to slip off the mountain which caused an entire home to be shifted off its foundation. This home was moved down the mountainside and rested nearly atop the railroad tracks below.

Just under a year after the first landslide, the owner of this home, Ed Stevens, is facing the devastation caused by this slide. Not only did he lose his home in the first one, but the debris has overtaken his property located on Ingleside Road. In addition to his home – which was built in 1891 – he also lost all of his antique furniture.

“When I bought the house I was going to go into it the following Monday morning to restore the it,” Stevens said. The Saturday before he was able to begin the restoration so that he and his wife could move into the home, the slide swept the home down the mountain to the railroad tracks.

According to Stevens, he has received no assistance regarding the loss of the home or the slide coming onto his property. Until the issue is resolved, Stevens is back at square one.

“I’ve got to see what they’re going to do. I come out here every day to check on it. I lost my house,” Stevens said disappointedly.

Unlike the 2019 slide, this slide is predominantly liquid-based according to Stevens. The first, was mostly rock and large pieces of land, this slide is “soupy” Stevens said.

“This slide is much worse. It’s going to be near impossible to clean up. The Norfolk Southern Railway employees were scooping it out of the railroad tracks like soup,” Stevens said.

Prior to the second slide, he and his wife had been preparing to move a home onto the property. With more rainfall on the way and cleanup still in progress, Stevens is aware of vehicles disregarding safety barriers. Similar to Croy, he’s also worried this could result in more sliding.

Area residents Jake Edwards is also ever-present of motorists moving the barrels. Living close to the slide, Edwards is forced to travel out of his way in order to get to work. Despite this, he refuses to drive through the closed section of roadway.

“Nobody stops there – at all. If you just sit somewhere and watch you can see five to 10 cars at anytime,” Edwards said.

Observing these vehicles drive through the closure worries Edwards about further sliding. Not only is there a threat to those below the slide but there is also fear of the roadway, on Country Girl Road, deteriorating with further use.

“That’s on them, I don’t go through it. If they want to go up there and try to fall through the road that’s on them,” Edwards said.

Edwards works in Princeton and his commute to work has lengthened due to the road closure.

After the heavy rainfall, there were 49 roadway closures due to flooding, mudslides and rockfalls according to a release from the West Virginia Department of Transportation. With the threat of further damage and preexisting damage from these issues, roadway employees are working to resolve the issues.

These closures are located in almost every WVDOT district, the release states. There are 10 districts in total with Mercer, McDowell, Raleigh and Wyoming Counties making up the 10th district.

Other counties that have suffered weather-related disasters include a rockslide in Braxton County and a rockslide in Mingo County, according to the WVDOT.

“It is safe to say we have our work cut out for us after the rains end,” Secretary of Transportation Byrd White said in the release.

Department of Transportation crews are currently monitoring areas where rock, mud and landslides can be an issue, the release states.