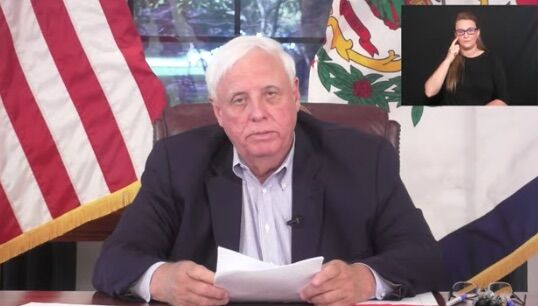 In this March 12, 2020, file photo, West Virginia Gov. Jim Justice speaks during a news conference at the State Capitol in Charleston.

In this March 12, 2020, file photo, West Virginia Gov. Jim Justice speaks during a news conference at the State Capitol in Charleston.

CHARLESTON — Gov. Jim Justice tried to walk a difficult tightrope Monday, voicing renewed opposition to vaccine mandates while also encouraging more residents of the Mountain State to get the jab.

“I stand rock solid behind our beliefs that we should stand behind our great freedoms in this country,” Justice, who spoke during a virtual pandemic briefing, said. “We’ve got to find someway to stop this, and right now the only bullet in the gun is vaccinations. We will continue to urge you, but we will not infringe upon your freedom and your beliefs, especially your religious beliefs in any way. But we’ve got to stop this.”

The news was better Monday for the Mountain State in terms of COVID-19 numbers. Statewide hospitalizations on Monday stood at 846, which is down from 1,012 hospitalizations last week. Only 757 new virus cases were reported Monday by the Department of Health and Human Resources, and only 10,561 infections in the state are currently considered active. However, another 41 COVID-19 deaths were reported across the state on Monday.

Justice, a Republican, said he doesn’t agree with the efforts of some politicians who are trying to divide the country between the vaccinated and the unvaccinated.

“When we get to the point in time when we are imposing our individual beliefs on others in America, it is the wrong thing to do,” Justice said. “We as sure as hell aren’t going to get through this when we start dividing our people and lining up the vax (vaccinated) and the (unvax) unvaccinated. We shouldn’t be looking down our nose at either side. We should be reaching out and helping one another. What I’m trying to do each day is educate more and more about the safeness and effectiveness of the vaccine and that there are no other bullets in the gun.”

His message may be working.

Justice said another 4,561 people in the Mountain State got the vaccine since his last pandemic briefing a week ago on October 7.

Justice said everyone should be respectful of each other, regardless of their vaccination status.

“We absolutely need to be respectful,” the governor said. “We don’t need mandates. This nation is divided enough. The one good thing about West Virginia is we’ve stayed together.”

While some Republican governors across the country have issued statewide bans on vaccine mandates and the use of digital vaccine passports to track one’s vaccination status digitally, Justice has taken no such action to date. However, West Virginia Attorney General Patrick Morrisey, also a Republican, recently announced that West Virginia had joined a coalition of 24 other states that are promising to fight President Joe Biden’s vaccine mandate on private employers with more than 100 employees in court. Morrisey considers that federal mandate to be unconstitutional and an overreach of the federal government.

With the West Virginia Legislature returning Monday for a special session on redistricting, Justice cautioned against the possibility of the state passing laws that affect private employers.

While virus cases across the state are trending downward — a sign that the summer Delta-variant fueled surge has finally peaked — Justice said he is worried about the possibility of another surge during the winter months.

As he does with nearly all of his virtual pandemic briefings, Justice encouraged those who are 65 and older with a chronic medical condition to wear a mask when indoors and for everyone 18 and above who is eligible for a third booster shot to get one.

“What are you waiting on?,” he asked. “You need to run to the fire and get that booster as well right now.”

Anyone 18 and older who had the two Pfizer doses at least six months ago are eligible for a booster shot in West Virginia.

“It’s hard to say if it is geographical, but statewide we are seeing a decrease in cases,” Amjad, who also spoke during Monday’s pandemic briefing, said. “I think most of the major hospitals are seeing an overall decrease. Over the last couple of days, we’ve had less than a thousand (new) cases statewide. That is helping.”

In Virginia, state health offices were closed Monday for Indigenous Peoples’ Day/Columbus Day, and no new virus numbers were released due to the holiday.