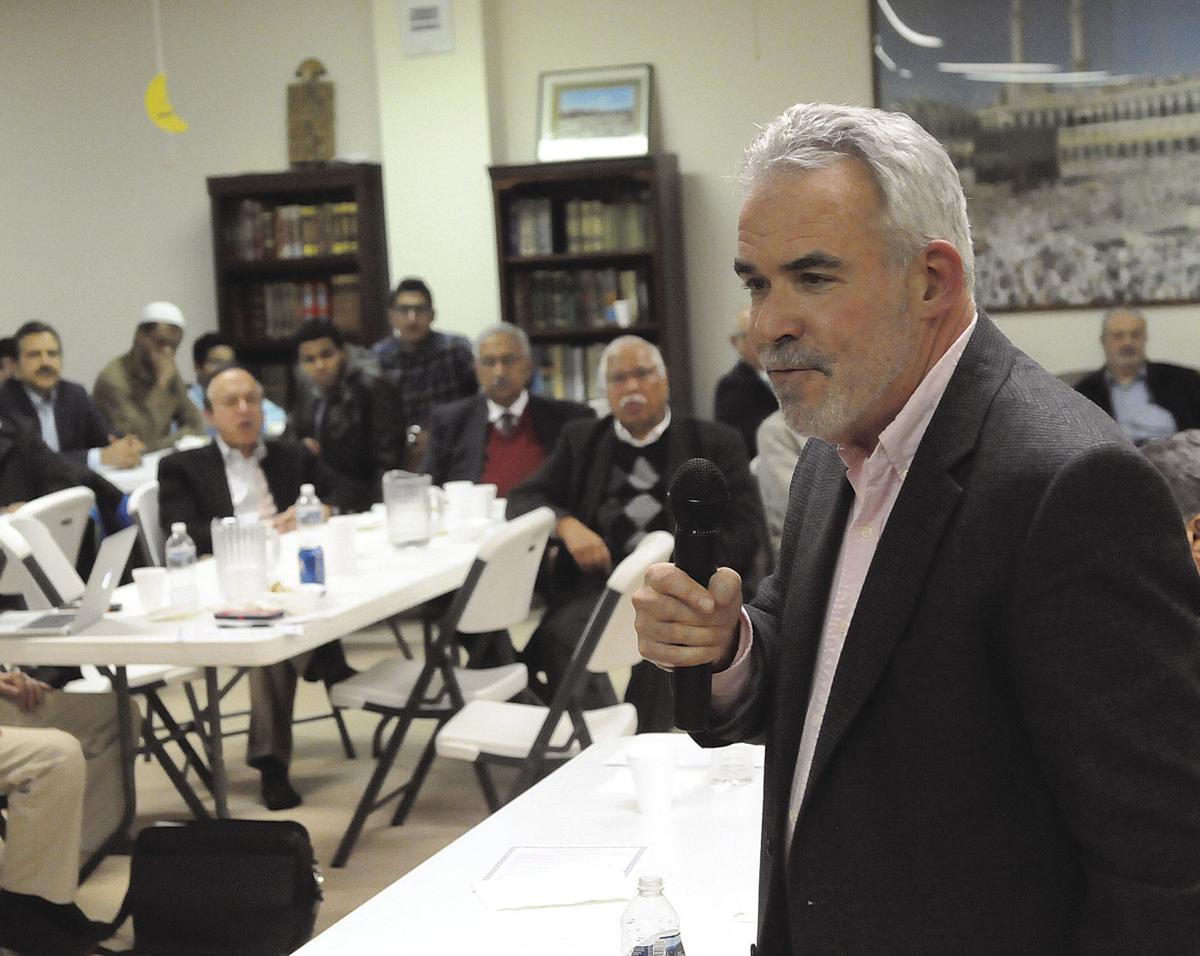 Rob Merritt speaks during an interfaith meeting at the Islamic Center in Princeton Friday evening. The event was designed to bring interfaith harmony and understanding in Bluefield and the surrounding communities. 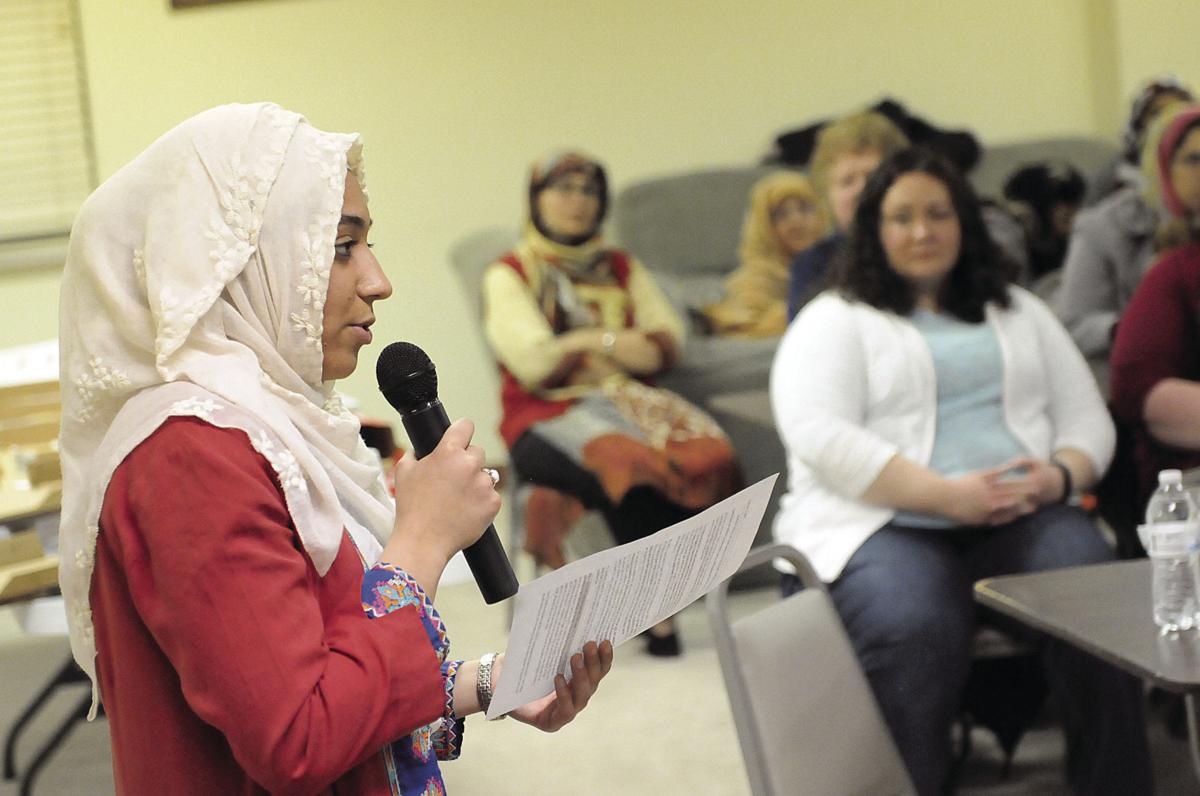 Misbah Muzaffer, a Bluefield College student, speaks to a large crowd at the Islamic Center in Green Valley Friday as part of an Interfaith Meeting in support of religious liberty. Muzaffer and the college were both targets of criticism recently when students celebrated World Hijab Day.

Rob Merritt speaks during an interfaith meeting at the Islamic Center in Princeton Friday evening. The event was designed to bring interfaith harmony and understanding in Bluefield and the surrounding communities.

Misbah Muzaffer, a Bluefield College student, speaks to a large crowd at the Islamic Center in Green Valley Friday as part of an Interfaith Meeting in support of religious liberty. Muzaffer and the college were both targets of criticism recently when students celebrated World Hijab Day.

GREEN VALLEY — An Interfaith group based in Bluefield met with area Muslims in the Islamic Center in Green Valley Friday night as a show of solidarity supporting religious liberty.

Dr. Rob Merritt, with Bluefield College, said the meeting was a result of the celebration of World Hijab Day on Feb. 1 when many students at the college joined a Muslim student in wearing a hijab.

Some area residents responded negatively to a Bluefield Daily Telegraph story about the student, Misbah Muzaffer, showing other students how to wear a hijab and explaining what it means and why she wears it, he said.

“That’s when I discovered I really live in a bubble,” he said. “The social media comments were unbelievable, negative, malicious and spiteful. It was disturbing.”

Merritt said acknowledging other faiths is positive and “Jesus taught us to love your neighbor.”

Merritt said education “is another reason we are here tonight,” learning how to spread the word into the community.

Bluefield College was criticized specifically after the story ran, he said, prompting college President David Olive to write an op-ed article for the Telegraph that was published on Feb. 7.

Olive said in the article that the college is a Christian college with deep Baptist roots, but “…religious liberties exist for everyone – the Christian, the Muslim, the Jew, and other faith traditions. Thus, we embrace freedom of religious expression.”

“We had a meeting of the faculty to discuss the controversy and the comments,” Merritt said, adding that the consensus was they are all proud to work at the college.

Muzaffer also spoke at the meeting.

“The past days have been very eventful,” she said. “We did not expect the response.”

But along with the negative responses were many supportive ones as well, she said.

“What I learned from that is we need to be kinder with those we differ from the most,” she said. “They need our love the most.”

Muzaffer said, as several speakers did, one of the problems is that many people’s main source of information is the news media, which often gives incomplete and often totally erroneous information.

“People are afraid of what they don’t understand,” she said. “We have to be transparent to ease their anxieties.”

Muzaffer said she did not expect “the mountain of support” she has received this past week, from the college, students and from people all over the world.

“It doesn’t matter what faith you are or what country you are from,” she said. “That doesn’t automatically make you a better person.”

People generally try to be understanding, she said.

“As a whole, they do not hate us, they are not out to get us,” she said. “We have to work on the us versus them complex. We have the same God. We need to embrace each other and form alliances.”

Adem Ozyavas, a professor at Bluefield State College, said it’s good to be reminded of the “things we should be doing.”

One of those things is dispelling myths about Islam, he said.

Maybe one of the most prolific myth is the meaning of the term “jihad,” which even dictionaries often define as a “holy war.”

“This is a very corrupt definition,” he said. “Jihad is not war, plus no war in Islam is ever preceded by the adjective of holy. No war is holy.”

Ozyavas said war is only permissible in Islam to stop the transgressor, only for self-defense.

The “misinformation and sometimes propaganda” spread by the media is prolific, he said, adding that jihad actually means the struggle within oneself.

“When you learn more about it (another religion), you will be a better person,” he said. “If you want to feel secure and safe … we need to educate people and fight against this propaganda.”

Informing the public of what Islam is all about is paramount.

“The wrong information is like a virus in our body,” he said. “If you don’t treat it, it will take over our body and everybody will suffer because of that. We have to make it our duty, like we eat and drink every day, this is something I will do everyday, educate people so hatred will not take over our society.”

Dr. Mohammed Iqbal, the emcee of the event, emphasized that the word jihad has “been transformed into being associated with war and death.”

Islam has strict rules even in war, he said, including forbidding the killing of “innocents,” like women, children or invalids, even animals.

Iqbal said the center has been vandalized in the past, probably as a way to “vent anger.”

Mercer County Sheriff Tommy Bailey has toured the center, he said, and it has nothing at all to hide.

“We are a community,” he said. “If anything happens here, nobody is going to come from California to hurt us, it’s local people.”

Iqbal said the meeting is a good start to having dialogues, exchanging views.

“You have to understand what is in someone’s heart,” he said.

The first verse in the Koran, he said, talks about compassion and showing mercy, controlling your anger, forgiving and being nice.

He also said no one is ever forced to join Islam.

Noor Qazi, a Bluefield State College student, said it’s important for everyone to have mutual respect.

It’s not just about tolerance, she said.

“We have to understand and respect each other,” she said. “We need to focus on a person’s value and experiences and we can see the similarities.”

Qazi said listening to others and learning about their beliefs is crucial for understanding.

“But you cannot water down your own religion to fit in,” she said. “You have to have healthy discussions without comparing or pushing your own beliefs.”

These exchanges of dialogue “can be an excellent way to heal divisions in society.”

Learning about others makes people view each other more favorably, she said, and helps create an environment where people can live without fear.

“What emerges is that our similarities as Americans are greater than our differences,” she said, adding that it is a matter of “reaching out to people and getting to know each other as people.”

Dr. Yasir Kanawati said it is “obvious” the world is going in the wrong direction, because people are “disengaging themselves” from God and His order and following man.

Kanawati said there are differences in the way they are practiced, but no difference in the belief in the Creator.

“We can find more common things than differences,” he said.

But Kanawati said there are “bad people” from all religions.

“That doesn’t mean the religion is bad or the person is following his religion when he commits bad things,” he said.

Other speakers related to this and discussed ISIS and said they do not represent Islam at all and, in fact, are mere criminals who should not call themselves Muslims, using religion as a cover-up.

One quote that was used said, “A member of ISIS is no more a Muslim than a member of the Ku Klux Klan is a Christian.”

They also pointed out that Muslims, as Christians, believe that Jesus is the Messiah and is returning.

Several of those who attended spoke and suggested more community meetings to provide education about Islam.

Isolating themselves is not the right course, but joining more in society is advised.

Iqbal ended the meeting by saying it was “pleasing to see so many people come together and exchange views.”

“Reasoning, rational thinking, that is what God wants,” he said. “What is the difference between us? Let’s get together and learn.”

Iqbal said education is the key to understanding.

“Ignorance is our worst enemy,” he said. “We don’t even know what we are judging.”

1 p.m., at the New Zion Regular Baptist Church. Burial will follow at the Elgood Cemetery.