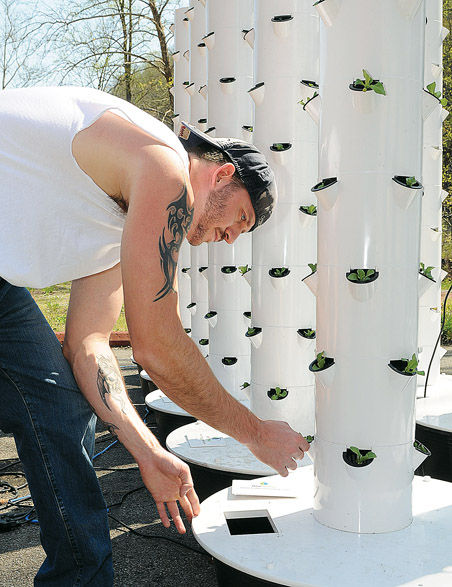 Joel McKinney checks the lettuce growing on the hydroponic towers outside of the Five Loaves and Two Fishes Food Bank. According to McKinney the lettuce is being grown for Mercer County Schools. The goal is to incorporate the operation, called Grow McDowell, with the food bank in order to provide produce for the needy and teach others to grow. 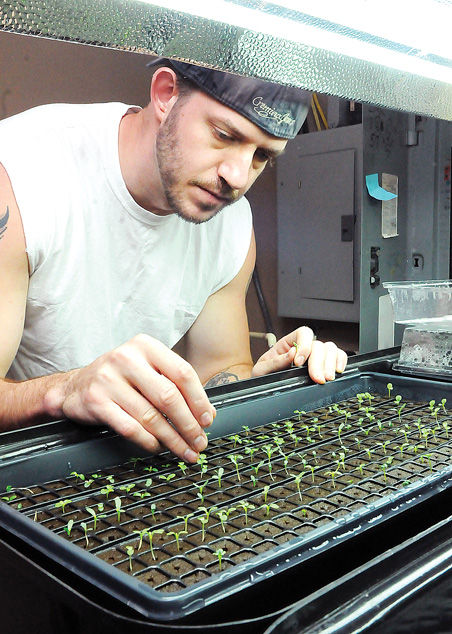 Joel McKinney looks over his seedlings beginning to take root in his hydroponics setup under the grow lights at the Five Loaves and Two Fishes Food Bank in Kimball.

Joel McKinney checks the lettuce growing on the hydroponic towers outside of the Five Loaves and Two Fishes Food Bank. According to McKinney the lettuce is being grown for Mercer County Schools. The goal is to incorporate the operation, called Grow McDowell, with the food bank in order to provide produce for the needy and teach others to grow.

Joel McKinney looks over his seedlings beginning to take root in his hydroponics setup under the grow lights at the Five Loaves and Two Fishes Food Bank in Kimball.

KIMBALL — Passersby on U.S. 52 in Kimball in McDowell County often stare at some tall white towers beside the Five Loaves and Two Fishes Food Bank.

Sometimes they even stop to take a closer look.

Many are surprised to see plants poking their little heads from slits all around the towers.

But Joel McKinney, who sets up and maintains the towers, is always glad to talk about his work, which is called hydroponic growing.

This is a way to grow vegetables without soil, using water in this case, he said, and it has many advantages.

“The growing time is much shorter,” he said. “From the time I seed (a head of lettuce), it will be ready for harvest in about 35 days.”

Not only is the growing fast, it doesn’t take up as much space because the plants are going up instead of out, with dozens of plants on one tower.

“I can grow 44 heads of lettuce on a tower rather than four on the ground using the  same space,” he said. “I am actually a vendor for Mercer County schools. I am growing 220 heads of Romaine lettuce for them.”

He also has an indoor growing operation, using large trays under lights.

McKinney’s mother, Linda, who runs the food bank, said the hydroponic way of growing in trays is good for people who are disabled or can’t bend over for whatever reason.

"Gardening is hard work,” she said. “The digging, weeding and hoeing. This can be done without that kind of work, and done sitting down.”

It’s also a good way for students to learn, she said, and they have worked in a class at Kimball Elementary School, helping students use a tower to grow lettuce.

“They loved it,” she said. “We made lettuce kabobs. They grew it, they prepared it and they ate it.”

For Joel McKinney, the hydroponic operation has, in a way, been a labor of love. The goal is to incorporate the operation, called Grow McDowell, with the food bank in order to provide produce for the needy and teach others to grow.

It’s also a project that fits in with his current academic goal of getting a degree in agri-business.

“Everything I’m doing is on my own,” he said. “I love it and I’m always looking at the science behind it. I like to do stuff hands-on.”

So when McKinney was looking for funding sources, he said he quickly became frustrated because people just wanted to meet and talk, and then do nothing.

He had an idea to build a “high tunnel greenhouse,” but did not have the money to finance it. Tired of the bureaucracy involved in seeking the funding through traditional governmental sources, he went to the website, gofundme.com, with the idea, and a goal of raising $15,000.

Highmark Blue Cross Blue Shield West Virginia in Parkersburg got on board, pledging to match up to $$4,500 of that $15,000.

That goal has been reached, Linda McKinney said.

The high tunnel will be 30 feet wide, 48 feet long and 16 feet tall, Joel McKinney said, and will include heating and cooling.

The heating and cooling will allow a longer growing season and the height is the crucial part.

McKinney said for plants that produce larger produce, like tomatoes, the towers will be replaced with the “Dutch bucket system.”

These are about the size of a mop bucket and will actually be hoisted up in the high tunnel on a trellis and accessed by a pulley system. That’s why the height is needed as many plants can be grown above the floor, not taking up ground space.

“The main goal is not only to supplement monthly distributions at the food bank, but also to become sustainable,” he said. “A whole food economy is what we’re trying to establish.”

That goal blends in well with McKinney’s agri-business academic work.

“I’m learning the economics of it,” he said, adding that his first love, though, is the more scientific-based hands-on work that allows him to experiment to see what works best.

McKinney said hydroponic growing has been around since the 1920s in this country, but took off during World War II (when the government looked for ways of soil-less gardening to feed troops overseas) and again with the widespread availability of plastics (better to use in the greenhouses).

The nutrients are in the water, which has to be circulated and treated, so each tower has a pump, which, he said, is too inefficient and he’s working on a way to use one pump with several towers.

McKinney is hoping to continue experimenting with the process to find the most efficient ways to grow.

In the meantime, both of the McKinney’s said they are tired of meetings and broken promises on funding the food bank and Grow McDowell.

“We don’t like meetings,” Linda McKinney said. “You can plan all you want, but somebody has got to do the work.”

Donations can be mailed to Five Loaves and Two Fishes, 171 Riverside Drive, Welch, W.Va. 24801, Linda McKinney said. Donors should write on their checks’ memo line whether they want to funds to go to the food bank or Grow McDowell.