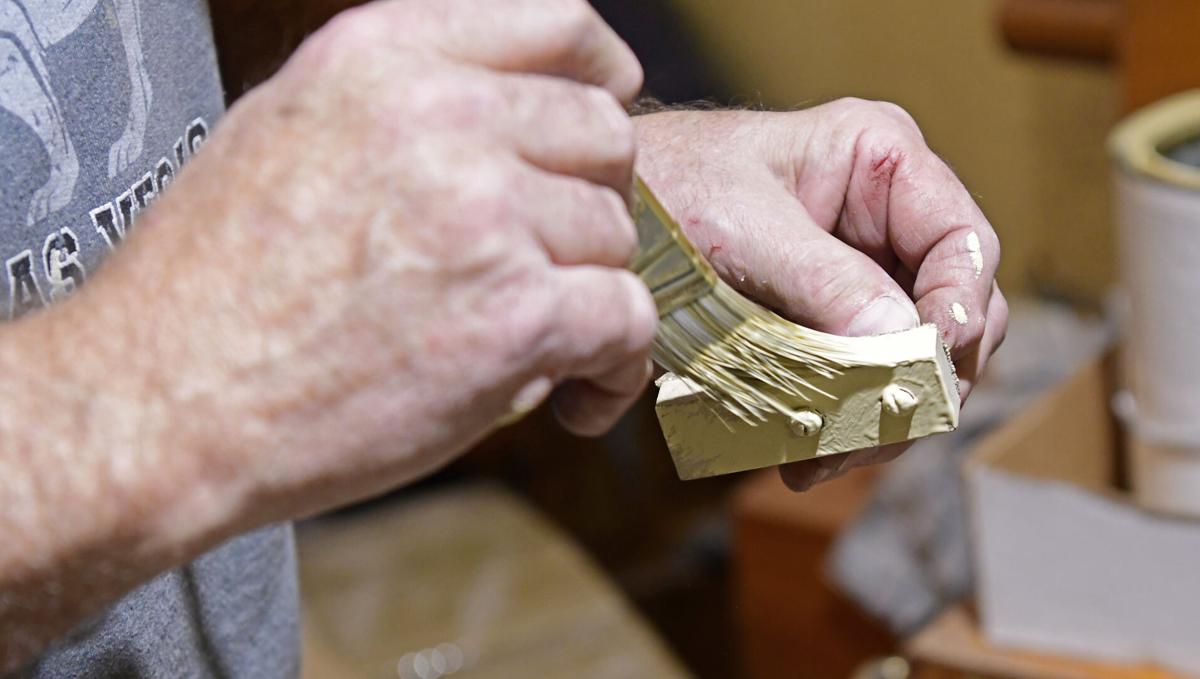 The Granada Theater’s finishing touches are currently underway, which will complete the $2.1 million renovation project started in 2019. 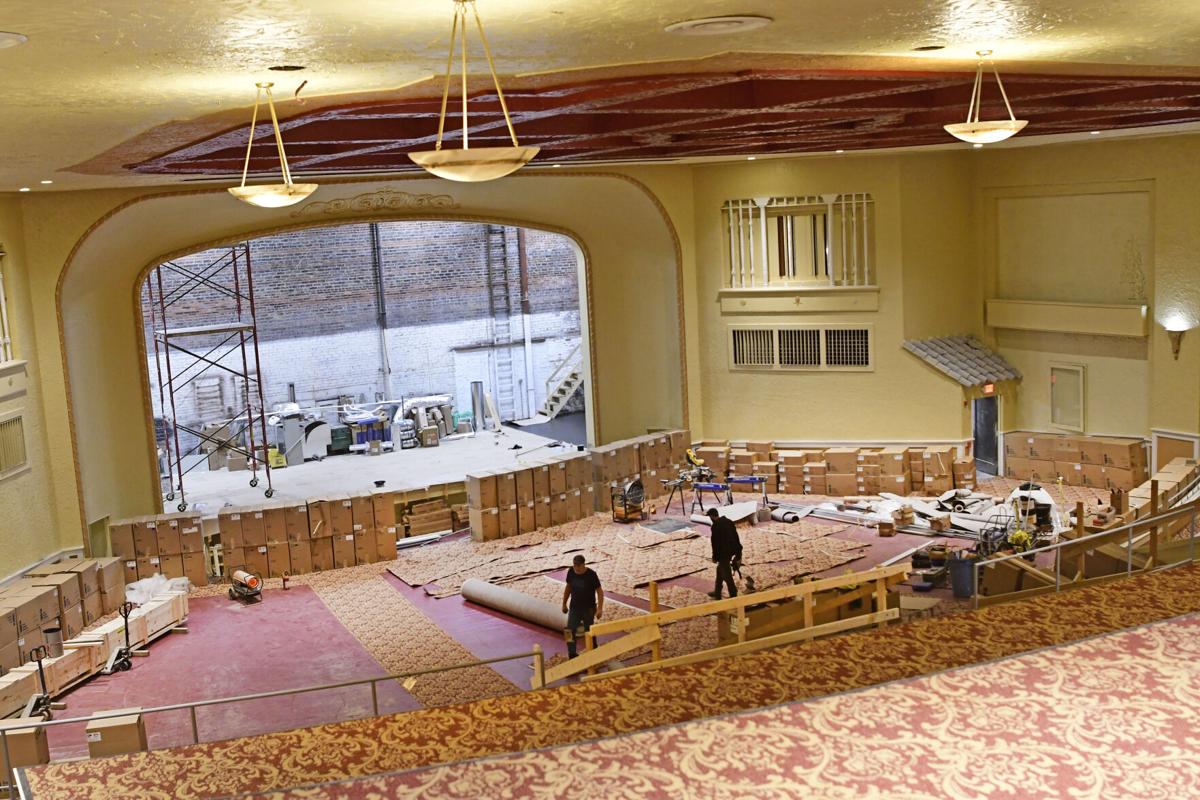 The Granada Theater in Bluefield is still under renovations and repairs, but the final touches are being carried out to reopen the historic theater to the public with state-of-the-art equipment.

The Granada Theater’s finishing touches are currently underway, which will complete the $2.1 million renovation project started in 2019.

The Granada Theater in Bluefield is still under renovations and repairs, but the final touches are being carried out to reopen the historic theater to the public with state-of-the-art equipment.

BLUEFIELD — Renovations of the historic Granada Theater in Bluefield will soon be complete and offer the community a performance venue with state-of-the-art digital and sound.

Swope Construction is in the process of putting the final touches on its part of the project, including carpeting, and money is now being raised for the seats.

Bluefield Mayor Ron Martin, who is also a board member of the Bluefield Preservation Society (BPS), which spearheaded the project, said a donor can sponsor a seat for $500 and that includes a space for an engraving of whatever the sponsor chooses.

“It’s the final part of the renovation fundraising,” he said. “This will help get everything complete and paid for.”

The sponsorships cover the cost of the seats, which are specifically designed for the theater.

Martin said the Granada, which opened in 1928 and served countless area residents over decades before closing in the late 1970s, should be ready to open “sometime in the first quarter of next year.”

When it opens depends on the pandemic, he said, but as far as the project is concerned, it will be ready, including the original organ that was used when the theater first opened.

“The organ is progressing nicely,” he said of the work to reassemble it. “We had volunteers (Jim Jenks and Harry Moore) who specialize in this who help put it together.”

The $2.1 million renovations began last year, thanks to fundraising efforts and the Shott Foundation matching grant.

“We are fortunate to have people step up when we need them,” he said, adding that all is paid for except the seats.

Julie Hurley, vice president of the BPS, has been involved from day one and said the decor of the theater is matched as closely to the original as possible, including the seats.

“We will have 530 seats in the main area,” she said of the slanted floor in front of the stage as well as the tiered seating, just as it was when the Granada showed movies to generations of area residents.

“We have tried to recover authenticity every way we can,” she said, adding that the oriental red seats will be little wider than the original and have cupholders available.

Hurley said above the tiered seating will be tables and chairs used for dinner theater and a catering kitchen is also located there.

“You can’t cook in there but you have microwaves, a warmer and sink and refrigerator,” she said, as well as a dumbwaiter and garbage chute to avoid bagging and carrying trash down the steps.

Swope Construction project manager Ryan Stanley said a crew will start installing the seats this week and should be finished in about two weeks, with the company’s part of the project completed by the end of the year.

“Hopefully, what we have will by done by the middle or end of next month,” he said, adding that the company is also donating and installing a vertical blade style lit marquee, which will be placed on the theater for easy visibility.

The original Granada marquee, which has been rehabbed, will remain as well.

Hurley said final touches will be done during January and the opening will then depend on the pandemic.

But when it is open, the theater will primarily feature cinema, she said, but also host live performance concerts, live theater and local productions.

“Both video and audio are state of the art,” she said, as well as the lighting system.

Movies will include classics, independent, foreign films and documentaries.

A $30,000 movie screen, along with curtains, have arrived and waiting to be installed.

Beside the entrance to the theater will be a gelato (Italian ice cream) shop on one side and a gift shop on the other side, she said, with both open to the public from the street as ongoing businesses, and both also have access from the theater when it is open.

Bluefield and theater memorabilia items will be featured in the gift shop.

The gelato shop will also include popcorn, candy and drinks, just as the original Granada concession stand offered.

Hurley said many of the decisions about what will be offered will be up to the artistic director of the Granada, who will make plans based on what the community wants.

An executive director will also be hired to handle the business side of the theater.

Hurley said the BPS and the city’s Alliance for the Arts have merged and the Granada will work in conjunction with the Bluefield Arts Center’s Summit Theater, which is a smaller venue.

“We are a single board now,” she said, “and we will be taking care of this property, the Arts Center, the Paine Gallery and the Summit Theater. “

The hope is, she said, that under this umbrella of the artistic director events will be scheduled that will complement each other and all facilities can be used properly.

This strategy also won’t compete with Princeton’s Chuck Mathena Center, which is a much larger venue.

The facility can also be rented out, she said, for events or corporate functions to maximize the use of the building. A possible  Oscar event could also be planned and involve nearby restaurants and shops.

Once the pandemic is over, Hurley sees the Granada as a regional attraction as well as a tourist destination for people who want to visit historic theaters.

Visitation downtown will be enhanced, which will help other businesses, especially restaurants, she added.

The renovation initiative actually began to take shape in 2013 when the Development Authority of Greater Bluefield purchased the building.

Fundraising efforts by the BPS began soon after.

Hurley said the group sold more than 4,000 jars of organic blueberry jam to raise money. Members also opened the Blue Spoon Cafe just down the street from the theater to start raising funds, with volunteers running the upscale, organic-based restaurant.

The restaurant opened in October 2015 serving lunch each weekday and BPS President Debrah Ammar said at the time the initial goal was to serve about 30 customers a day.

But that goal was exceeded and the business was sold two years ago to Nicole Coeburn who continues to operate it.

The group also auctioned a 2018 Buick Cascada donated by Tom Cole, owner of Cole Chevy and former mayor of Bluefield, to raise funds, with all of the money made matched by the Shott Foundation.

BPS board member Skip Crane said in a previous story many may not know that the Granada was built for stage performances as well.

“It was built for vaudeville,” he said. “These were live productions and Bluefield was on that circuit.”

Another member, Doris Kantor, said that in its heyday some famous people visited Bluefield, including Frank Sinatra, Bing Crosby and Greer Garson.

Performances will be enhanced with an original piece of the decor: the Wurlitzer Style EX, Opus 1790 theater organ.

The organ left the Granada years ago and was taken to the Evans Theater in Indiana, and from there it was transferred to Huntington and installed at the Keith Albee Theater.

A mutual friend of Crane and Thomas Lester’s of Bluewell, former Bramwell resident Bob Edmunds, discovered the organ while teaching at Marshall University in Huntington. It became available when the Keith Albee’s original organ was found.

“We’ve been told it sounds like a big carnival carousel,” Ammar said. “All the bells and whistles come with it. It has a xylophone, drum beat, cymbals, hand bells, and what they call a whoopee horn.”

The organ will be located in the orchestra pit with two panels with “blowers” on each side of the stage on the walls. These are the devices that supply the wind enabling the pipes to sound.

Hurley said it is now not a waiting game to finish the project and be ready to open, but rather waiting for the end of pandemic restrictions so performances can be offered.

Seat sponsorships can be mailed to Bluefield Preservation Society, PO Box 4044, Bluefield, WV 24701. Contact any board member for more information.