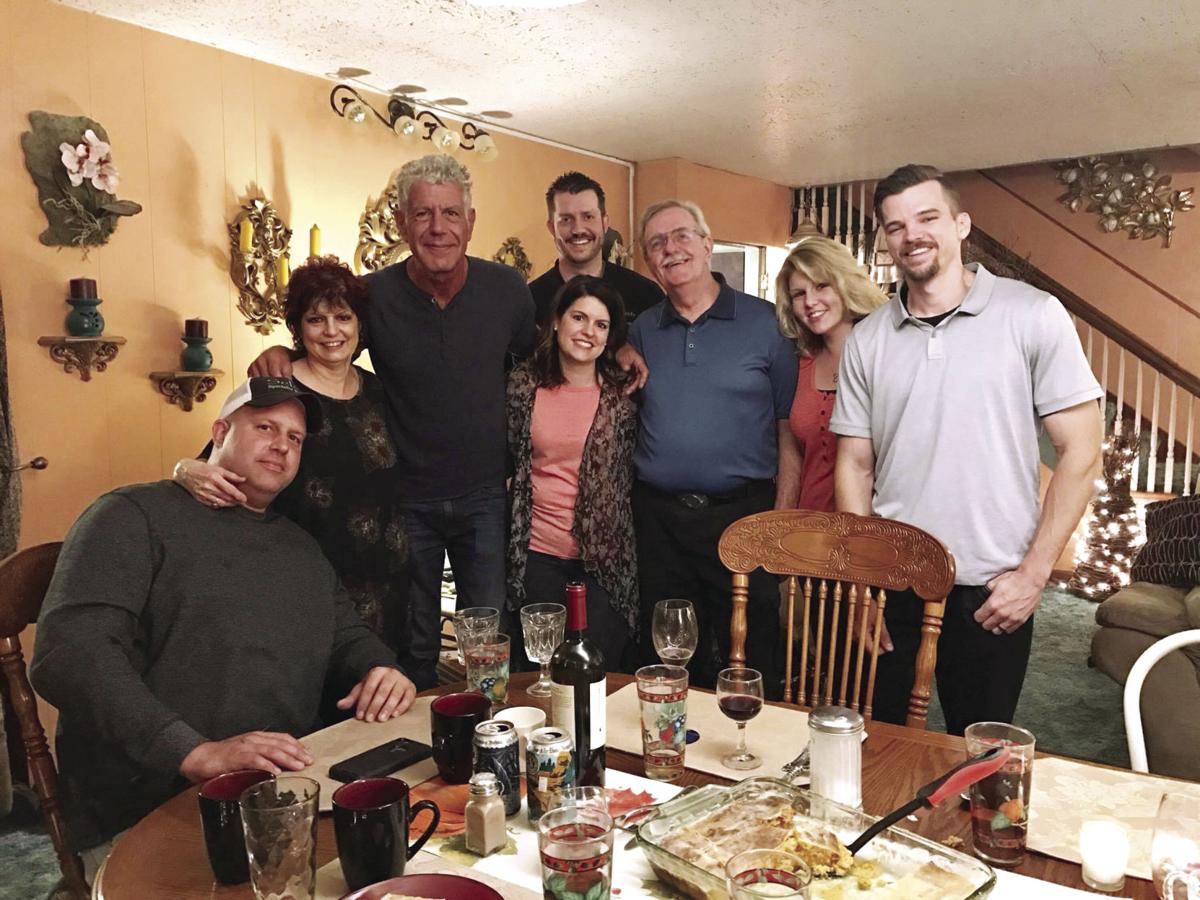 Anthony Bourdain poses for a photo at the home of Linda McKinney, on his right, in Welch last October when his Parts Unknown show made a stop in McDowell County. McKinney cooked a family style Italian dinner for him. The show’s episode about West Virginia aired on Sunday, April 29 on CNN. 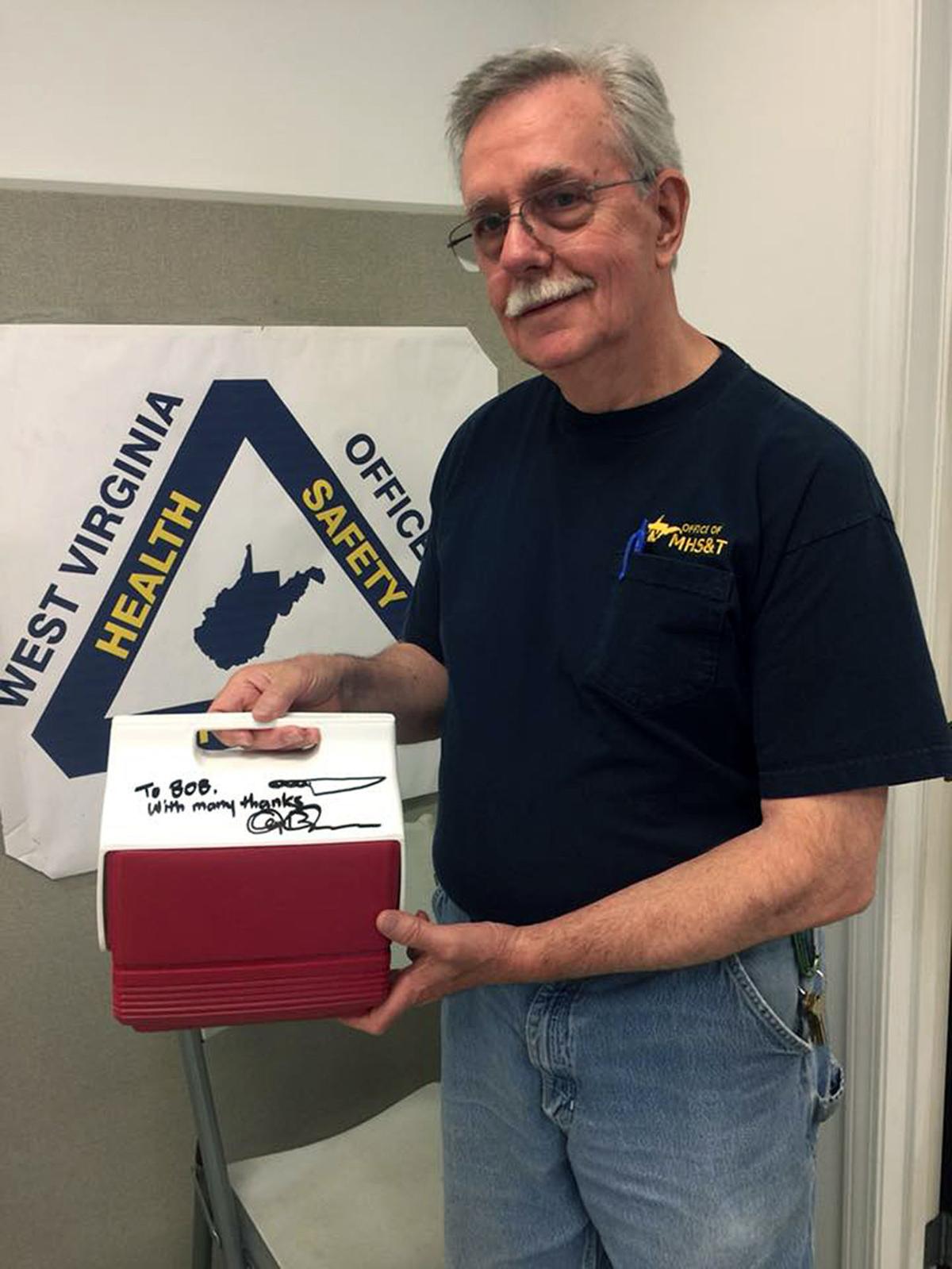 Bob and Linda McKinney received an autographed lunch cooler Thursday from Anthony Bourdain. The gift arrived the day before CNN announced that Bourdain had died in France.

Anthony Bourdain poses for a photo at the home of Linda McKinney, on his right, in Welch last October when his Parts Unknown show made a stop in McDowell County. McKinney cooked a family style Italian dinner for him. The show’s episode about West Virginia aired on Sunday, April 29 on CNN.

Bob and Linda McKinney received an autographed lunch cooler Thursday from Anthony Bourdain. The gift arrived the day before CNN announced that Bourdain had died in France.

WELCH — In October 2017, a guest Bob and Linda McKinney had over for dinner borrowed Bob’s old miner’s lunch bucket. He was going into an underground coal mine, and he wanted to take an authentic lunch pail with him; however, he forgot to bring it back.

But that guest, chef and television personality Anthony Bourdain, didn’t forget that bit of absentmindedness. He was shooting the season premier of his show “Anthony Bourdain: Parts Unknown” in McDowell County, and he didn’t forget the warmth and hospitality the McKinney family had shared with him and his crew. While visiting the Welch home, he was served Italian dishes including Linda’s pizza spaghetti.

In early May, Bob and Linda watched the show and came away feeling that Bourdain had presented McDowell County and southern West Virginia in a positive light.

Bourdain came back into their lives Thursday when a package arrived at the Five Loaves & Two Fishes Food Bank in Kimball. The show’s crew shot a scene there because Bob and Linda operate it. Linda said that she at first assumed that it was a DVD or a DVD set of Bourdain’s show. Bob, who is a mine safety trainer, works nearby, so she took the package to his office and he opened it. Bourdain had not forgotten about the lost lunch bucket. Inside the package was a new lunch cooler.

“He sent us a new one and autographed it,” Linda said Friday.

On the cooler’s lid was written, “To Bob, with many thanks, Anthony Bourdain.”

Bourdain had even drawn a chef’s knife on it. Delighted, Bob and Linda put their new memento in their china cabinet.

But then came Friday morning and sad news. At the age of 61, Bourdain was found dead in his hotel room in France. CNN said Bourdain was in Strasbourg filming an upcoming segment for his series “Parts Unknown,” and was calling his death a suicide.

“It’s devastating,” Linda said. “We hadn’t turned the television on that morning.”  They started receiving phone calls and learned of Bourdain’s death as soon as Bob left to go to work.

“I was in shock. We’re just shattered,” Linda continued. “Bob and I were just sitting here talking about it. People have been calling and texting us. It’s just so hard to believe. It’s unreal. You never know. He was only in my home for a brief time, and he was the kind of person you felt like you knew forever. He was just so easy to talk to.”

The fact Bourdain was such a warm and easygoing guest makes the idea that he was dead, and that the news came so soon after a warm gesture on his part makes the news of his passing especially saddening.

“It’s just unreal,” Linda said. “My heart, my heart hurts. It will take a little while to process. You never know what’s going on in someone’s mind. I’m so hurt for his child. He absolutely loved his little girl. She was learning to cook, and they would cook together when he was in New York. I hurt for the child, I really do.”

Linda said that she was wondering what would happen to Bourdain’s show, but she knew that Bourdain would be well remembered by her family. His gift will remain in the family’s china cabinet, and it will never be used.

“Bob’s so proud of it,” Linda added. “It’s just a little memento from him one day, and the next day he was dead. He was such a talent, he was a very talented man.”

When Linda McKinney of McDowell County received a call from a CNN producer with the TV show, “Anthony Bourdain: Parts Unknown,” she was a bit apprehensive.

‘They showed it just like it is’: McDowell family featured in CNN’s ‘Anthony Bourdain: Parts Unknown’ watches season premiere

Anticipation built up Sunday evening as Linda and Bob McKinney watched their television and waited for a special show to come on. Thanks to a guest they had over for dinner last October, millions of people were about to visit their home and get a look at McDowell County.