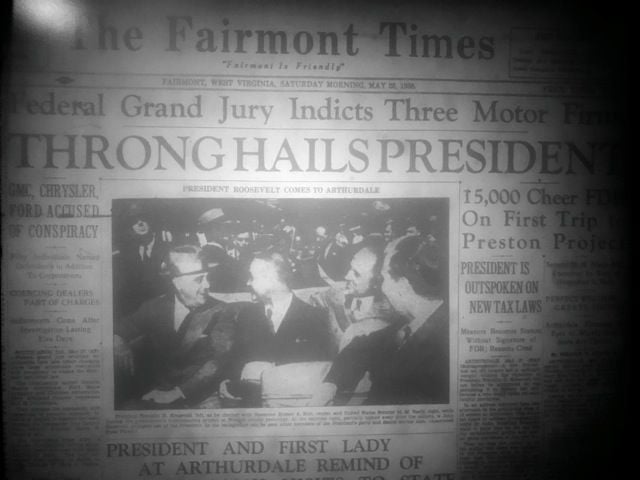 The cover of the Fairmont Times on May 28, 1938, portrayed the excitement felt as Franklin Roosevelt came to West Virginia. 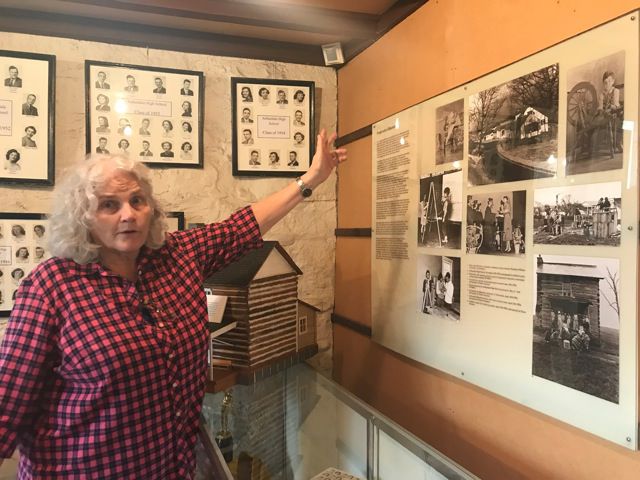 Volunteer archivist Jeanne Goodman gestures to a display about the Arthurdale school’s curriculum, which included practical skills such as carpentry and weaving.

The cover of the Fairmont Times on May 28, 1938, portrayed the excitement felt as Franklin Roosevelt came to West Virginia.

Volunteer archivist Jeanne Goodman gestures to a display about the Arthurdale school’s curriculum, which included practical skills such as carpentry and weaving.

REEDSVILLE — “Franklin D. Roosevelt, President of the United States, came back to West Virginia yesterday and mingled with the people whose welfare has been his predominating motive in five years of White House occupancy.”

It wasn’t Roosevelt’s first visit to the state as president, but it was a meaningful one for many West Virginians, especially those in the homestead community called Arthurdale, located near Reedsville in Preston County. It was this community that brought FDR back to the state, thanks in large part to the efforts of his wife, Eleanor.

“Six years ago, Mrs. Roosevelt made her first visit to the district and on Scott’s Run viewed the plight of hundreds of miners, left stranded by idle mines.”

The area around Reedsville had been heavily mined in the early 20th Century, according to Jeanne Goodman, current volunteer archivist and former director of Arthurdale Heritage Inc. This was particularly true during World War I, when there was a large demand for the kind of coal coming out of the mines in the area, of which there were over 35.

“During World War I, they were making pretty decent money, but after World War I was over, the demand for it dropped,” Goodman said. “We were heading toward a depression, things got worse and worse.”

At first, the coal mines lowered the workers’ salaries, then cut back on the workers’ hours. Soon, the workers weren’t able to earn enough to feed their families, or buy the things they needed. Some were even kicked out of their homes.

“The whole area was just obviously in terrible condition once the stock market fell down,” Goodman said.

West Virginia University got involved in trying to help the residents through the extension departments, helping people grow food, but Goodman pointed out that Reedsville was a coal mining area, with land not necessarily good for agriculture.

Some residents tried hand-making items, such as furniture, that would be taken to large cities for wealthier people to buy, but the market for these items was not close, which made it difficult.

The Roosevelt Administration saw how desperate things had become for many communities throughout the nation, and decided to try everything they could think of to try to help people, and see what worked, Goodman said.

One set of initiatives passed during this time of “alphabet agencies,” were the Subsistence Homesteads provisions under the New Deal, which aimed to relocate poor, rural families into communities funded by the government where they would have land, a home, and an opportunity to learn and earn money.

Preston County was identified as an area that could benefit from this program by journalist Lorena Hickok, who had been hired by the administration to go to communities and report back on the conditions, Goodman said, adding that Hickok was good friends with Eleanor Roosevelt.

After hearing about the deplorable conditions, Eleanor Roosevelt went herself, and spent a week going from home to home, coming back with heart-wrenching stories.

So the government got to work establishing Arthurdale as the first “New Deal community.”

“President Roosevelt will visit three houses during his tour of the 1,133-acre community. One of them will be representative of the first group of frame bungalows constructed in the late 1933’s. Another will be one of the second set, more modern in design and construction, and the last will be one of the newer houses, mostly of stone construction.”

The specific site for Arthurdale was chosen because on the property was a huge mansion owned by the Arthurs, the patriarch of which had done well in Pittsburgh business earlier in life, but had lost his money, and his property was on the unpaid tax rolls, Goodman said. The government bought his land for the new community.

The government selected those who could live in the community and rent houses, with criteria such as being married and having at least one child. Applicants also had to fill out an eight-page questionnaire testing their aptitude for agriculture, Goodman said. Then, social work students from WVU would visit the applicant families, to see if they were making an effort to survive, or if the family had “given up,” she said.

Fifty families were initially selected to live in the community, which in the beginning, started out with nothing.

“There’s nothing here,” Goodman said. “There’s no roads, there’s no septic, there’s only a giant house and some fields.”

So homesteaders, as well as others in the nearby communities, were hired to build the homes, providing economic opportunities for many men. And at the same time, the government paid the women to weave curtains and bed linens for the homes.

The first homes built were one-story prefabs called Hodgson homes. Then, 75 two-story homes called Wagner houses and 40 Stone houses were added to the community for a total of 165 houses. Goodman pointed out that 163 of them are still in the community today, though many are unrecognizable due to additions and renovations.

As part of the Arthurdale Heritage Museum, visitors can tour a Wagner house, decorated just like it would have looked in the 1930s. You can view the original tub and sink, a galley kitchen with lots of storage space, well-lit living room and the upstairs master bedroom and children’s room.

“(Roosevelt) also will see the factories in which the homesteaders are employed, the 442-acre co-operative farm, the co-operative poultry houses, dairy and grist mill, the general store, theater and the community and school buildings.”

“When they started, they all were given a milk cow, a couple hogs and some chicks so that they could have their own food that way,” Goodman said. They also had a plot of land to grow their own food, which they were encouraged to can using the in-town cannery.

A non-denominational church was the first building to go up, and is still in use today as a community hall. Two wings added on to the church housed a post office, barber shop and craft shop.

There were many opportunities for the residents to make items that could be sold to those outside the community. There was a pottery where various items were made, and a forge (also still in working order today), where residents made pewter and copper items to sell or furnish their homes with. Weaving was big at the time, and people would weave in their homes and sell items through catalogs.

Making colonial furniture was a big enterprise at Arthurdale, and workers were subsidized to produce it. Goodman pointed out that this was never self-supporting though, as the industrial revolution made it difficult to make money on handmade goods.

Goodman said many businesses tried to locate in Arthurdale, pointing out that at different times, there were businesses that made trainer airplanes, tractors, walkie-talkies, vacuums, shirts and more, however the temperamental weather and distance from the markets made the location flawed from an industrial standpoint.

“It was a brilliant, fighting, diplomatic Franklin Roosevelt who, standing before a microphone under the fiery heat of Kleig lights, told high school graduates of their stake in the future and of the importance of their acquainting themselves with governmental affairs that shortly will be their affairs.”

The occasion of FDR’s visit in 1938 was to give the commencement speech for the fourth graduating class at Arthurdale High School.

“No president has ever done, before or after, a high school graduation,” Goodman said, adding that the occasion was so momentous that Life magazine attended for a piece in one of their editions.

Eleanor Roosevelt came, though she had been at the community many times, and was heavily involved from day 1.

She attended all the graduations for the first 10 years, passing out the diplomas that she herself had signed.

But the education the students at Arthurdale received was not typical. Goodman likened it to a Montessori Method of education: very hands-on, where children learned by doing. Goodman gestured to photos in the former Arthurdale administration building, now a museum. One photo showed a small boy learning how to spin wool. Another was of a girl, about 5, using a hand saw. Goodman said students could do whatever they wanted to learn, and the administrators would bring in renowned educators to teach them.

“It was very practical, day-to-day kind of living that you studied when you did this,” Goodman said. This “handicraft” aspect was the rule for the first three years, however the students graduating were not receiving a valid high school, state diploma. So eventually, she said, they became part of the state system, but the practical handicraft aspect was still maintained for many years.

“Tired but smiling, Mrs. Franklin D. Roosevelt swung a partner in a square dance tonight at the first senior high school prom of her first and favorite government homestead.”

Several photos adorn the well-preserved walls of the Arthurdale village depicting Eleanor Roosevelt dancing and generally enjoying her time there.

“She loved to do the Virginia Reel, so whenever she was here, they would have a dance for her,” Goodman said.

The community was a place of joy and hope for those who lived there, a close-knit community, but was viewed by outsiders as a flawed experiment.

“We were the first of 99 communities that were built by the federal government,” Goodman said, adding that there were two others established in West Virginia. “This was called the Reedsville Experiment, and it was an experiment. They made a lot of mistakes here because this was the first one.”

Things got better in the region during World War II, when jobs were plentiful as the men were off at war and the women were picking up their work. So the government sold off the homes in the homesteads throughout the nation, allowing residents to buy their house with credit for what they had paid as rent.

Not everyone purchased their homes, and some moved to another home in the neighborhood.

The main buildings in Arthurdale fell into disrepair until the 1980s, when residents celebrated the community’s 50th anniversary. A group of volunteers formed Arthurdale Heritage in 1984 to start trying to save the buildings, which they did with great success.

And today, visitors can drive through the well-preserved, first New Deal community, experiencing what life would have been like so many years ago, and walking through the community where Eleanor Roosevelt danced the Virginia Reel.

Newspaper excerpts, in italics, are from staff and AP wire reports published in The Fairmont Times May 26-28, 1938.

Tiffany Towner is the editor of the Times West Virginian. She can be reached at ttowner@timeswv.com.