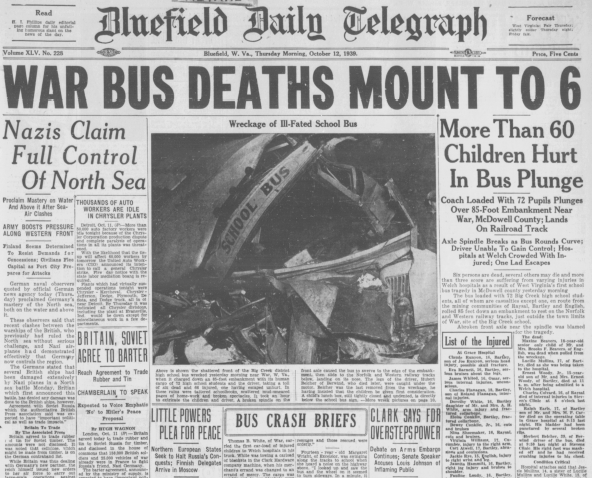 This image of an Oct. 12, 1939 Bluefield Daily Telegraph front page shows the original news story and photograph of the fatal bus crash in War. 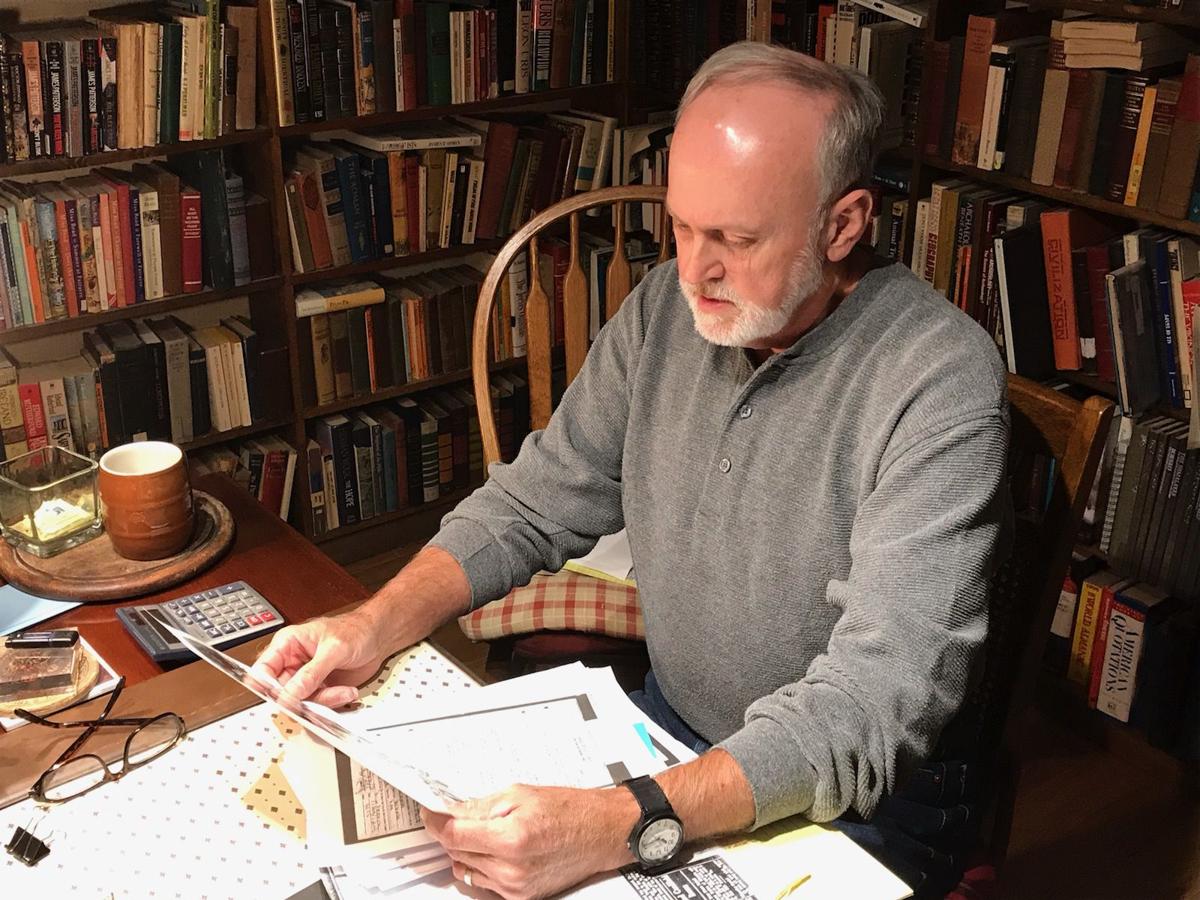 Edward Rotenberry speaks about the crash during an interview. 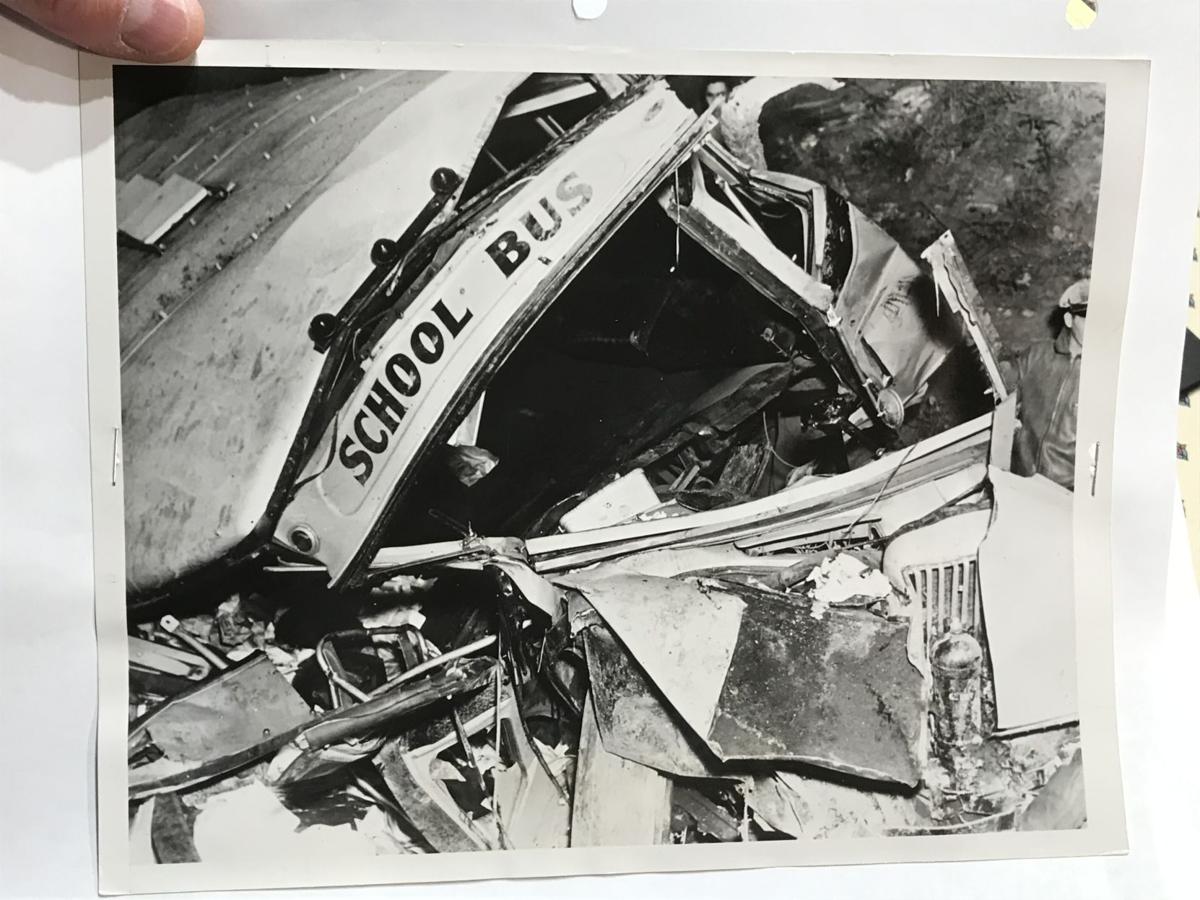 This photograph of the Daily Telegraph front page image from Oct. 12, 1939 shows a clearer picture of the wrecked school bus.

This image of an Oct. 12, 1939 Bluefield Daily Telegraph front page shows the original news story and photograph of the fatal bus crash in War.

Edward Rotenberry speaks about the crash during an interview.

This photograph of the Daily Telegraph front page image from Oct. 12, 1939 shows a clearer picture of the wrecked school bus.

WAR  — Slightly over 80 years ago, World War II was underway in Europe. Headlines like “Nazis Claim Full Control of North Sea” and “Nazis Air Force Pressure Grows” were on the front page of the Oct. 12, 1939 edition of the Bluefield Daily Telegraph, but the lead headline, “War Bus Deaths Mount to 6” was that day’s most important story.

On the previous day – Oct. 11, 1939 – a McDowell County school bus carrying 72 students to Big Creek High School plunged over an 85-foot embankment near the city of War and landed on Norfolk & Western railroad tracks. By Oct. 12, five students and the bus driver had died. A sixth student later died, and many of the survivors had serious injuries. A broken spindle on the front axle was blamed for the tragedy.

Today not many people remember the local tragedy overshadowed by the start of a world war, but the students’ graves can be found in cemeteries across the region. Edward Rotenberry of Athens, who has researched local history, has studied the tragedy. He sat down in his personal library. Books with topics ranging from world history to local history fill the shelves. He opened a file filled with details about the 1939 War school bus crash.

The crash site was on the road coming into War from the English area. It is a mountainous area with steep embankments plunging 75 to 88 feet.

“There was no guardrail, and it was straight down onto the N & W Railroad tracks. And the doctors just showed up and all the ambulances showed up and all of (the students) were taken to the hospital except one that wasn’t injured. But I think five of them went home and they had to round them up. They had minor injuries. This one, Ray McKinney, told me he was in the hospital for about a month,” Rotenberry said. “I’m not sure he could actually remember (how long).”

Rotenberry said he learned about the 1939 crash while reading books about McDowell County history, so he decided to do his own research and see if there were any details yet to be found. Besides finding newspaper articles about the tragedy, he located death certificates and talked to McKinney, one of the survivors.

The Oct. 12, 1939 Daily Telegraph listed the injured students’ names as well as the names of those who had died; some died at the scene and others succumbed to their injuries later in local hospitals. After years of research, Rotenberry was able to find their final resting places.

The students who died as a result of the crash and their final resting places are as follows:

Finding one grave was difficult because the cemetery where it’s located has not been maintained. Rotenberry looked through his file and found a copy of a document.

“This is the death certificate for Lucille White. She is the one I spent years trying to find her grave,” he recalled. “She’s buried in the English Cemetery;  it’s just a wide spot in the road. It’s between War and Bradshaw. I kept asking and somebody said it’s right up there on the hillside, and you can get to it only in winter. It’s so overgrown. You can’t even tell there’s a cemetery there. It’s unbelievable how it’s grown up. I’m in the process now. I’ve talked to several people and I’m going to see about clearing it if we can.”

Tragedy continued to touch Alma Lucille White’s family after her death. Her father, Jasper White, died in the Bartley Mine explosion in January 1940, Rotenberry said. He was the last coal miner recovered after that disaster.

Other families touched by the crash continued to experience tragedy. The father and brother of another student who died, Lucille Mullins, were killed in the Bartley mine explosion, too.

“Mrs. Mullins lost her daughter then lost her son and her husband, and she was evicted from her house by the mine authorities after the Bartley explosion because she did not have a relative working for the company,” he said.

All of the cemeteries were being maintained except the one with Lucille White, Rotenberry stated.

The exact location of one grave, that of bus driver Hulbert Belcher of Berwind – referred to in some accounts as Herbert Belcher – isn’t quite clear. Rotenberry obtained a copy of Belcher’s death certificate. The place of burial is listed as Belcher Family Cemetery at Clearfork, but it doesn’t state which county the cemetery is in. His body was taken to the home of J.H. Atwell after he died in a Welch hospital, and his funeral service was at the Baptist Church in War.

According to the Oct. 12, 1939 Daily Telegraph, Belcher’s legs were caught under the engine. Despite his injuries, his first thoughts were for the students.

“Belcher was the last removed from the wreckage, he having insisted that the children be given first consideration,” according to a cutline under a photograph of the vehicle’s twisted remains. Rotenberry said rescuers had to amputate one of Belcher’s legs to free him.

Rotenberry said finding Belcher’s grave and remembering the students who were aboard that school bus 80 years ago is important because they are part of history.

“You don’t know what the potential was for these kids.” He checked his notes. “One of the girls was first in her class in junior high school or something. It’s just so tragic. I think these people had such tragic lives, they had such potential.”

“I just think these kids should not be forgotten,” he said.

Rotenberry can be contacted at ekrotenberry@gmail.com on the internet.