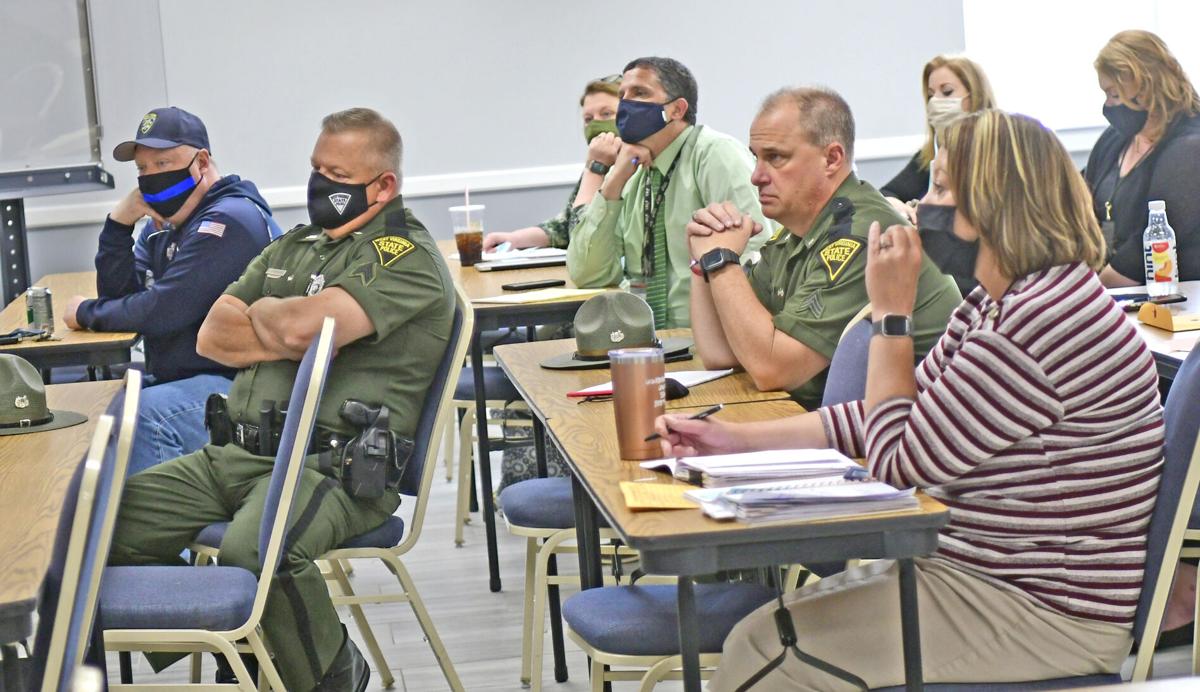 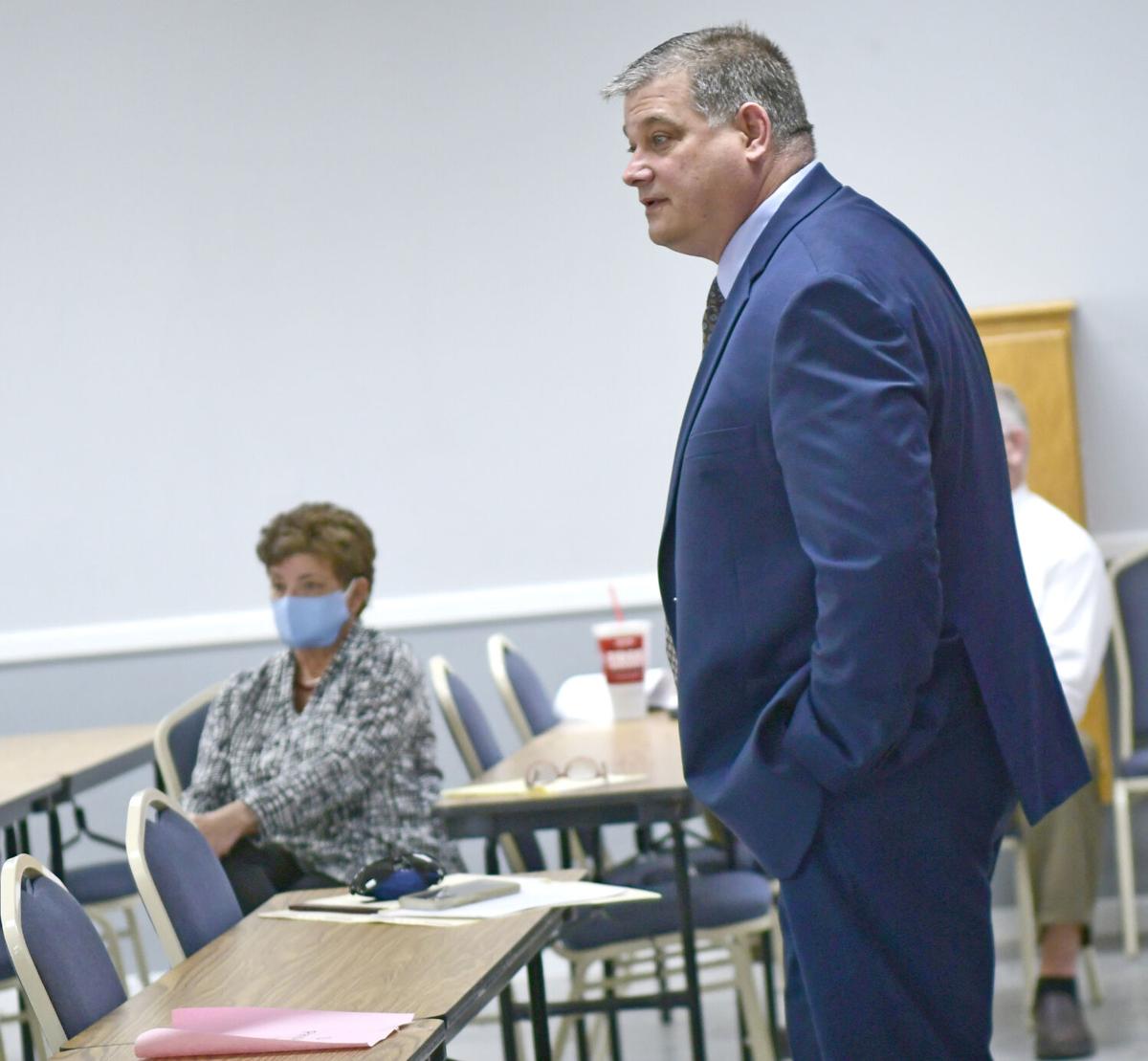 PRINCETON — Parents and other fans getting upset at school basketball or football games is not uncommon, but increasing reports about spectators cursing and threatening school officials or other fans prompted Mercer County’s prosecuting attorney, school officials and law enforcement agencies to meet Wednesday and send a message: violent behavior won’t be tolerated at school games.

Prosecuting Attorney Brian Cochran met with county school officials and members of the law enforcement community at the Mercer County Technical Education Center to address the growing problem of parents and family members cursing and threatening teachers, vice principals, referees and other officials when they attend the games at local high schools and middle schools.

Cochran said he has received calls from principals about the behaviors they’re seeing at ball games, and saw one incident in which a principal was threatened and cursed.

“My understanding is that there have been some serious threats of physical harm to principals, vice principals and teachers,” he said. “That, to me, should not be tolerated at all.”

The people acting out at ball games are usually county residents, Cochran said.

And the people making these threats and acting out at games are usually individuals who are otherwise law-abiding citizens, Cochran added.

“A lot of these are good people who usually wouldn’t do anything illegal,” he said.

Superintendent Deborah Akers said the ongoing problem has been with parents and other members to students’ families being disruptive and making threats when their children are at the games.

When school personnel and the public are at a school’s basketball game or any other extracurricular event, they are expected to exhibit good behavior and set an example for the students, Akers said. The school system has measures in place which include barring individuals from ball games for up to a year.

“We’ve had these in place, but (incidents) are escalating and it will not be tolerated,” Akers said.

Cochran asked Akers and other school officials about the procedure for barring individuals from games and school property. Assistant Superintendent Todd Browning said that letters informing the individual that he or she have been barred, and for how long, are delivered to them in person.

Chief Dennis Dillow with the Bluefield Police Department told the audience that such letters have to be hand-delivered or sent by certified mail in order for them to let the recipients know that they could face trespassing charges. Copies of the letter should be kept on file at the schools or provided to local police departments so officers can have them if they are called in, he added.

“It can’t be just dropped in the mail,” Dillow said.

In cases including threats of bodily harm or other incidents at ball games, Cochran said that law enforcement officers cannot make an arrest unless they witness the act. When an officer isn’t available, school personnel need to file a complaint. Once this complaint is filed, it can be taken to a magistrate to see if there is probable cause and a warrant for the individual can be issued. The teacher or any other school employee filing the complaint should be ready to testify, too.

“It’s a pretty simple process, but you have to do it for us to know,” Dillow said, adding that his department and others are happy to help. Without official complaints, the problem will continue to escalate.

“Honestly, I think if we make an example out of a few, it will stop,” he stated.

Sgt A.P. Christian with the West Virginia State Police Princeton detachment reminded school officials that fans often shoot videos with their cellphones when threats and other incidents happen at games, and getting these help when a complaint is filed.

Akers said that the school system appreciates the support from local law enforcement. Having uniformed officers at games helps deter people from acting out, but she added that she knew local agencies cannot always provide officers.

Sheriff Tommy Bailey and Christian said that with their staffing, deputies and troopers who could volunteer to work overtime at a game are not always available. Bailey added that schools can call Mercer 911 if there is a problem at a game. Dillow asked about getting retired police officers who work at the schools, and Akers said the school system would look into the idea.

Cochran said that no cases concerning incidents at school sporting events have been brought to his office since he became prosecutor. After the meeting, he said that his office will prosecute charges that are filed by school personnel who are threatened at ball games.

“We want to let people know that threats against school officials are very serious,” he said.

Threats and assaults against school officials carry a more severe penalty than those committed against a regular citizen, Cochran stated.

“Usually a judge has discretion, but in an incident involving a school employee, the sentence is mandatory,” he said.

One goal of the meeting Wednesday was to educate the public about the possible consequences of behaving violently at school sporting events, Cochran said later.

“In ballgame situations, most people who get overly excited and act out of character are really good people and good citizens, but they will be subject to mandatory jail time,” Cochran emphasized. “So we just want to get the word out that certain behavior will not be tolerated and will be prosecuted because our school personnel, coaches or referees do not deserve to be threatened with violence. There are other, more appropriate, avenues to complain other than threats or physical confrontations with our local school officials.”