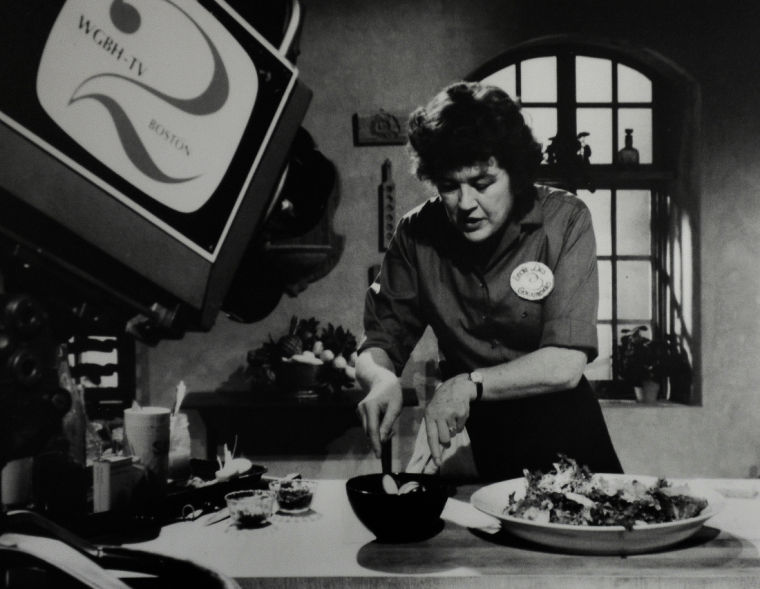 Julia Child’s kitchen exhibit at the National Museum of American History displays a vintage photo of Child taping a TV show in her kitchen. 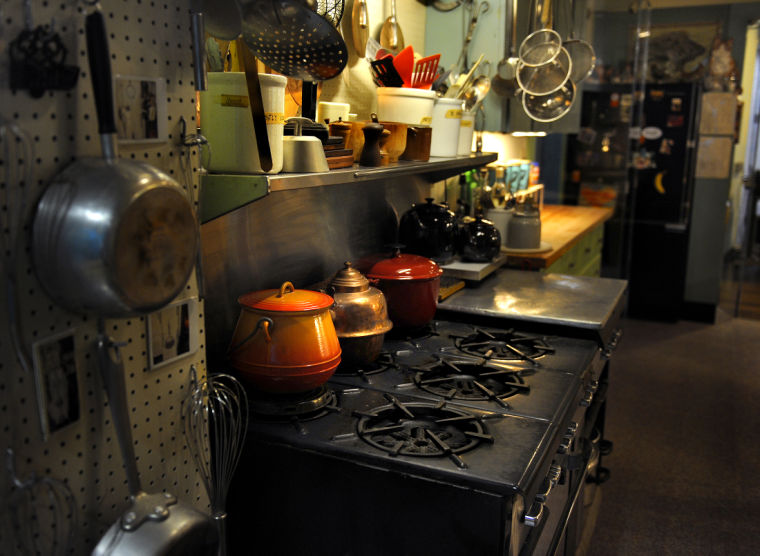 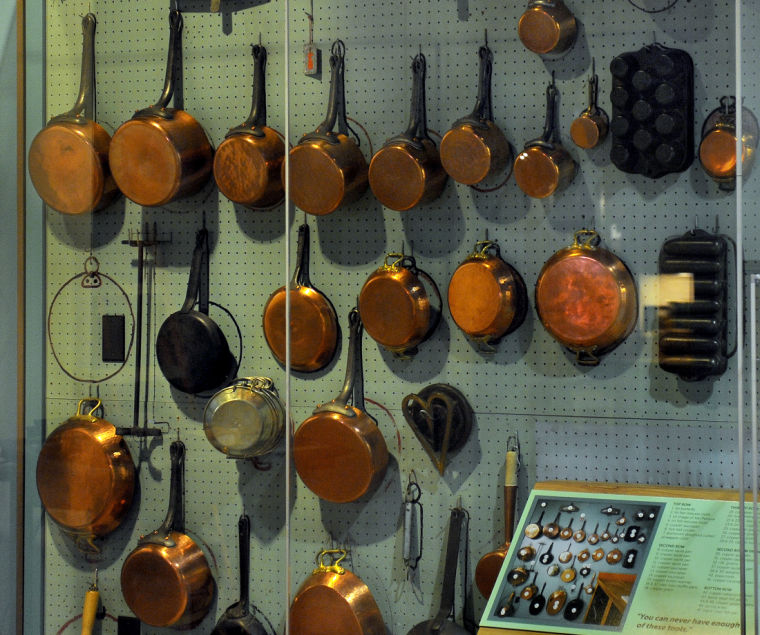 Julia Child’s kitchen exhibit at the National Museum of American History displays the four dozen pots and pans that she used. 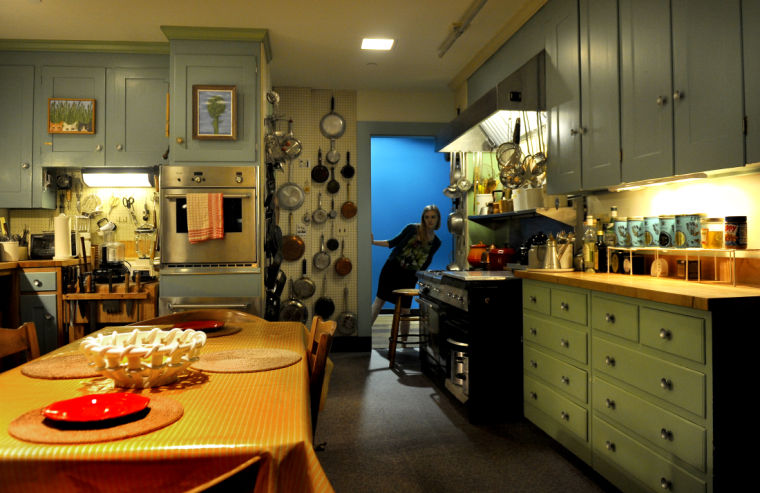 Julia Child’s kitchen exhibit at the National Museum of American History displays a vintage photo of Child taping a TV show in her kitchen.

Julia Child’s kitchen exhibit at the National Museum of American History displays the four dozen pots and pans that she used.

It was a party they didn't want to miss, and a deadline they knew they had to make: Aug. 15, on what would have been Julia Child's 100th birthday.

The very Smithsonian curators who had negotiated with the 89-year-old icon in her Cambridge, Mass., kitchen in 2001, catalogued the room's contents, packed them up and created one of the National Museum of American History's most beloved exhibits, only to disassemble it a decade later for the sake of infrastructure improvement, are reopening the kitchen at its new site, where the museum's Hall of Agriculture used to be.

And they've got some surprise fun of their own planned for the public at 1 p.m. on the big day. Butter and music will be involved.

"We just had to make the 100th," says Rayna Green, one of the original team motivated to aim big 11 years ago. Museumgoers "have been begging us since the exhibit closed in early January," she says.

Those who have committed to memory the peg boards and lorgnette and tableware-filled firkins through repeated visits or online via www.americanhistory.si.edu/kitchen will be pleased to press their noses up against a set of windows whose blinds were previously drawn. Keen eyes can now decipher Child's handwritten label on the coffeemaker and assess the physics of a countertop stone-crab claw cracker that looks like it belongs beside an architect's drawing board.

The setting is ultra-real yet reverential. In this ordinary space, an extraordinary woman changed the way Americans ate. Three of her cooking shows were televised in it, amid the utensils, objects and art that made her happy. Where's the appeal in a soulless, sleek cooking environment with everything tucked out of sight? This exhibit makes you wonder, and the curators say it prompts strangers to share stories with one another as they explore.

It gets even better for Julia-philes. The copper pot collection represented only in outline until it was reunited with Child's kitchen in 2009 now hangs directly across from where it belonged. Child's French Legion of Honor medal of 2000 and the 1996 Emmy statuette for "In Julia's Kitchen With Master Chefs" are displayed nearby. The mystery of an accompanying, cantaloupe-size tea infuser has been solved: It's a rice-cooking ball, says co-curator and project director Paula Johnson.

When "Julie & Julia" director Nora Ephron came to see the pots' unveiling, she wrote a check on the spot to help support the museum's Julia Child efforts. "She loved food, and she loved Julia," Green says.

The so-called JC100 celebration has been building since May — 100 days' worth, involving bookstores, social media and restaurants nationwide. Credit the marketing prowess of Alfred A. Knopf, which has this month published "Dearie: The Remarkable Life of Julia Child," and Kim Yorio, head of YC Media public relations in New York.

"You come up with these things and wonder how they're going to go," she said last week in a phone interview. "I wanted to share the rigor and quality of her recipes with a new generation. I kind of don't want it all to end."

For Yorio, the project was personal. In 1996, as a "baby publicist," she accompanied Julia and Paul Child on an eight-city cook-and-book tour across America. "We really had fun," she says. "Julia was up for everything. Very engaged in what we were doing, how we were doing it, and into the execution of the food."

This time around, Yorio's goal was to get people talking about Julia Child, she says, in part through Facebook, Twitter and Pinterest. Child's body of work — 3,678 published recipes — was the starting point. YC Media got the definitive list from the search-engine gurus at EatYourBooks.com. Then Yorio asked a select group of culinary luminaries who each had a connection to Child to use the list as a ballot. The top 100, chosen by Judith Jones, Jacques Pepin, Thomas Keller, Dorie Greenspan, Ruth Reichl, Ann Willan and Amanda Hesser launched special dinners at an initial 100 restaurants during Julia Child Restaurant Week (Aug. 7-15). A hundred food blogs, including LittleFerraroKitchen.com and TasteAsYouGo.com, were invited to feature a recipe each week. A hundred written and/or video tributes were compiled.

In addition to a special menu and putting on a "Good Time" evening at Ris in Washington, D.C. that will raise funds for the museum, chef Ris Lacoste hosted screenings of "Cooking for Julia" last week at a Washington theater. The 28-minute documentary is near and dear to her heart, chronicling what it took to execute a 90th birthday dinner for Child and 160 guests at 1789 in Georgetown, where Lacoste was executive chef from 1995 to 2005. The event was planned to coincide with the opening of the kitchen exhibit in August 2002. Child died two years later, just shy of her 92nd birthday.

Lacoste was 26 when she first met Child in Paris. "I was a secretary for Ann [Willan] at LaVarenne Ecole de Cuisine," she says. Child came to her cooking school graduation. Their lives would intersect again and again, both in France and in the United States. Small moments are easy for her to conjure: Sharing a meal in 1983 with the Childs at Au Bon Accueil on the Montagne de Beaune toward Savigny les Beaune in the Cote d'Or, Burgundy, the young chef was taken with the way Julia grabbed a handful of frites and plopped them on the paper placemat, a la blotter.

If she can do that, I can do that, she noted. Lacoste remains active in the American Institute of Wine and Food, co-founded by Child in 1981.

"I was struck by her graciousness, no matter the venue," Lacoste says softly. "She could smile at the millions who approached her. Her memory was so fine-tuned. She could connect every single person she met.

"And I learned, most importantly, from her, to approach things as a student."

Julia Child's kitchen is the entry point. Rightly so.

1 p.m. at Cravens-Shires Funeral Home in Bluewell. Entombment will follow at Roselawn Mausoleum in Princeton.

1 p.m. at the chapel of Fanning Funeral Home in Iaeger. Burial will follow in the Hunt Cemetery in Mohawk.

1 p.m. in the chapel of Oak Hill Funeral Home in Kingsport, TN.