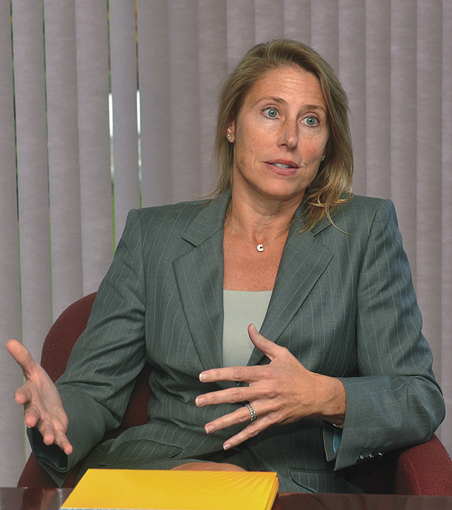 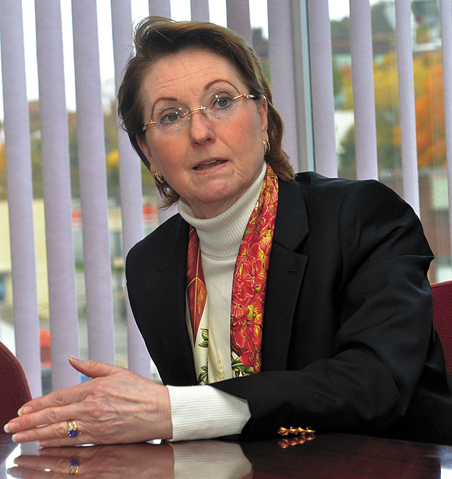 The candidates include incumbent Justice Robin Jean Davis of Charleston, a Democrat; former West Virginia State Bar President Letitia “Tish” Chafin of Charleston, also a Democrat; and Republicans Allen Loughry of Charleston, and Judge John Yoder of Harpers Ferry. The candidates met last week with members of the Daily Telegraph’s editorial board where they discussed a variety of issues, including public perception of the high court, whether future judicial elections should be non-partisan, safeguards against conflicts of interest among the judiciary, and the need for an intermediate appeals court.

Each candidate was asked to give a brief introduction.

Davis has served as a justice on the court for more than 15 years, and served as chief justice in 1998, 2002, 2006, 2007 and 2010. Davis graduated from Van High School and earned her bachelor’s degree from West Virginia Wesleyan College. She went on to earn both her master’s and law degree from West Virginia University. She has served on the West Virginia Supreme Court since 1996. Davis was initially appointed to a four-year unexpired term and was elected to a 12-year term in November 2000. She also served as a member of the six-person law firm Segal and Davis, L.C., with her husband, Scott Segal, from 1982 to 1996. In 1993 she became the first lawyer in West Virginia inducted into the American Academy of Matrimonial Lawyers.

“As president of the state bar, I was the only attorney to be able to visit all 55 courthouses,” Chafin said. “But there is a bit of a perception that it is not fair and balanced. I also saw that when I was president of the state bar traveling to conferences across the country. The one case cited is Caperton v. Massey. I think that gives West Virginia a little bit of a black eye and helps to perpetuate what I think is a little bit of misconception that we can work to overcome.”

Chafin, the wife of state Sen. H. Truman Chafin, D-Mingo, graduated from Marshall University and then went on to graduate from the West Virginia University College of Law. She is managing partner at the H. Truman Chafin Law firm, and is licensed to practice in both West Virginia and Kentucky. Chafin has also been admitted to practice before the United States Supreme Court, Fourth Circuit of the United States Federal Court and the Southern District of West Virginia. She has proposed a “Balanced Court Initiative” aimed at restoring public confidence in the high court through a recusal reform when there is a perception of a conflict of interest in a case a justice is hearing. Under her proposal if a justice decides against recusing himself or herself from a case, the justice would be required to issue an opinion, based on the facts of the individual case, as to why he or she believes the recusal is unnecessary.

“I’m proud to work with the Supreme Court,” Loughry said. “I really am. I think the court is moving in an incredibly positive direction. But perceptions don’t change overnight. People are frustrated generally with our system. But I think the court is moving in a very positive direction, and I think as we start fixing problems with our system, our court’s perception will get better.”

Yoder is currently a Circuit Judge in the 23rd Judicial Circuit of West Virginia.  He holds court in Jefferson, Berkeley, and Morgan counties, and is the supervising judge in Morgan County. After serving four years as a state circuit judge from 1976 to 1980, Yoder was the only person selected in a national competition to serve at the United States Supreme Court as a Supreme Court Fellow in 1980. He was later hired by the chief justice to work on his staff. President Ronald Reagan later appointed Yoder to establish and run a new subdivision at the U.S. Department of Justice. Yoder also was elected and served as a West Virginia state senator for eight years prior to getting elected as a circuit judge for the 23rd Judicial Circuit in 2008.

The four candidates were asked to elaborate on public perceptions about the high court, and if that perception is having any impact on whether businesses are choosing to locate in the state.

“My fellow candidates call me out and say I’m very defensive about the court, and I am,” Davis said. “I have worked on the court for 15 years. I’ve seen the good, the bad and the ugly. We can’t ignore Blankenship. That was three years ago. Well you talk to the labor community, and everyone is generally satisfied with our court and feel like they are getting a fair shake. There is no agenda on our court now and there hasn’t been for some time.”

“I will say the business community — they have looked at this race very clearly,” Loughry said. “I’m pleased to be endorsed by the coal association, the state chamber, hospital association, state medical association, and a host of others. It’s not in talking with business leaders across the state, it is not that businesses just want to win every single case. They just want to walk out of a courtroom and feel like they’ve had a fair day in court.”

“The Balanced Court Initiative is among two initiatives I would like to implement should I be elected to the Supreme Court,” Chafin said of her plan that seeks to create an open and impartial high court. Chafin said the plan will assure citizens and businesses will know that their cases are heard fairly and equitably.

“I clearly think there is a negative perception,” Yoder said. “Some people will argue whether that perception is fair or unfair. But the position I take is the perception become reality and if businesses believe we have a court system that is anti- business they will take their jobs and investments to other states where they see a more favorable business climate.”

Yoder said West Virginia has been ranked five times as 50 out of 50 in terms of the legal climate for businesses.

“I live in a border area because I live in the Eastern Panhandle, and my judicial district is next to Maryland and Virginia as Bluefield is next to Virginia,” Yoder said. “I think those of us who live in border areas are more sensitive to how our state, and the court system, impacts jobs and how competitive it is with neighboring states.”

The candidates were asked if they would support non-partisan judicial elections.

“I know in Pennsylvania as a judge you can register in both parties,” Chafin said. “I think as long as you elect judges there are going to be affiliated and associated with groups. I’m in favor of electing judges. But I can tell you as an attorney in federal court or in front of the West Virginia Supreme Court, when you talk as a lawyer, the last thing you are talking about is what is the political affiliation of the judge. It just doesn’t happen. Politics and party affiliation doesn’t normally enter into it.”

“I favor non-partisan election of judges,” Loughry said. “I think judges should be non-partisan. People want to feel as if they are selecting or electing judges at the end of the day, and not politicians.”

Although West Virginia is still a primarily Democratic state — resulting in more Democrats in public office — Loughry said the trend is changing and a Republican majority is entirely possible in 15 years.

“Since 1996 I have been very consistent, and I would have no objection to running in a non-partisan race,” Davis said. “I feel like politics have no place running in a Supreme Court. I would fight to my last breath to make sure we never, never go back to those days. I think it is unfair. I think the fact that I’ve been endorsed by labor, and law enforcement and business, and most of the newspapers that have endorsed me so far, I think that speaks closely about my perception.”

The candidates also debated over whether additional rules or safeguards are needed on the high court to avoid perceptions of conflict of interest among the judiciary.

“I understand what Justice Davis said that the court is ready to move on with it,” Chafin said of the high court controversy three years ago. “But the nation is not done with it. Courts across the country are revamping their recusal rules and states are doing it with great success.’

“Allen is absolutely right with regards to our rules,” Davis said. “We have a rule in place saying there shouldn’t be any expert communication between a judge or litigant. So I guess she (Chafin) wants to write another rule to cover what we’ve already done. In the past 19 months, we’ve had 49 disqualifications, and of those 49 disqualifications, 45 of those were voluntary. For example, if my husband files a motion for the court, I have enough common sense to get out.”

“I would support some changes, but I don’t support her specific proposal because there are problems with it,” Yoder said. “But I would support a rule of change on recusals. I understand the chief justice is coming up with a proposal after the election. I’m content to wait on that.”

The candidates were asked if they felt an intermediate appeals court was needed for West Virginia.

“I’ve been very consistent in my opposition to an appellate court,” Davis said. “There is just no need. We have a specialized court that will deal with businesses. That should go a long way in making sure the business community feels like they are getting a fair shake. And lastly, I could see the argument better if the argument was the Supreme Court is not getting the job done. But we are in fact getting the job done.”

“The rules have been in place for almost two years now,” Chafin said. “And I think there has been enough history now for the Legislature to take a long and hard look at it. I think they need to reach out to all of the different constituency groups, and see if the rules are working and if we need an intermediate level appeal court.”

“I favor it,” Yoder said. “The same survey that I told you about in terms of our poor legal image with the U.S. Chamber of Commerce talks about things that are recommended, and an intermediate court of appeals is recommended to change or improve our system. The  lack of an intermediate court of appeals is one of the reasons given for the reputation we have.”

Robert H. "Bob" Raines, 79, of Cedar Bluff, VA, passed away on October 20, 2020. A native of Russell County, Bob was preceded in death by his wife of 38 years, Carol Myer Raines, and his parents, John "Hub" Raines and Mary Helen Raines. He is survived by his daughters: Robyn Allene Raines of…